From the slums of Bangladesh to the fashion houses of the world – luxury leather goods from Dhaka generate sales of more than $1 billion a year.

There are more than 200 tanneries in Hazaribagh, Dhaka, employing more than 30,000 workers.

Every day, the tanneries discharge 21,000 cubic metres of toxic waste into gutters that flow into Dhaka’s main river. 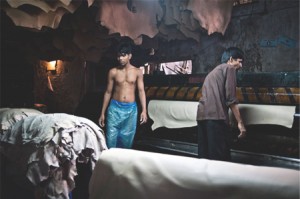 In 2009, the Bangladeshi High Court asked the government to relocate the tanneries to an area outside of Dhaka, reports Aljazeera.

Industries Minister Dilip Barua said the government is committed to an environmentally-friendly tannery zone, but as yet, little has been done due to disagreements between the authorities and tannery owners, over who should bear the cost of moving.

“This [leather] is a product that is used worldwide for luxury goods, but for these workers who are making them, neither the owners nor the government are looking after our health and safety,” Abdul Malek, head of the Tannery Workers Union, told Al Jazeera.

Each year 14 million raw hides are processed into leather in Bangladesh – the leather is then exported to top fashion labels in dozens of countries around the world.

The country is a major supplier of leather to Europe, with Italy being the largest importer of Bangladeshi leather, buying goods this year worth around $85m.

Al Jazeera’s Rob Reynolds, reported from Dhaka, “Conditions here are so bad that a new report just put out by an influential group of European and American environmental organisations, named Hazaribagh as one of the five most polluted places on the planet.”

And Syeda Rizwana Hasan from the Bangladesh Environmental Lawyers Association, added: “If you want to know how hell looks like … come to the Hazaribagh tanneries and have a look at the tannery area, that should tell you perhaps how hell looks like.”

So, what hope is there for an improvement in the working conditions in Bangladesh’s tanneries? Is it the responsibility of the factory owners, the government or the big importers in the West?  have a more responsible role to play?