The 94th birth anniversary of Father of the Nation Bangabandhu Sheikh Mujibur Rahman is being observed across the country in a befitting manner today (Monday). 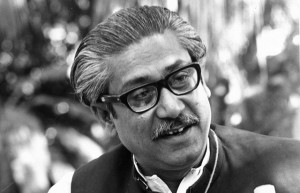 Apart, the day is also being marked as the National Children’s Day. The day is a public holiday.

On March 17 in 1920, the architect of the nation was born at Tungipara in Gopalganj district.

Through his dynamic leadership, Bangabandhu organised the Bengali nation to fight against exploitation and repression by Pakistani rulers, which culminated in independent Bangladesh after a nine-month war of liberation in 1971.

On August 15, 1975, the legendary leader of the land was assassinated, along with most of his family members, by some disgruntled army men.

President Abdul Hamid in his message said that Bangabandhu Sheikh Mujibur Rahman, the greatest Bangalee of all times, since his boyhood was humane and generous but uncompromising on the question of establishing rights and always nourished Bangla, Bangalee and Bangladesh in his thought.

Hamid mentioned that in the early 40s of the last century, the charismatic leader actively participated in politics in close association with Huseyn Shaheed Suhrawardy and Sher-e-Bangla AK Fazlul Haque.

He noted that the visionary leader led the nation in every movement towards attaining democracy and autonomy, including Language Movement in 1952, Jukta-Front Election in ’54, movement against Martial law in ’58, Six-Point Movement in ’66, Mass Upsurge in ’69, and the general elections in ’70.

During the Pakistani regime, he was sent to jail several times and had to endure inhuman sufferings for his active participation for and within all the causes and movements, plus of course his firm stance in favour of independence, the President added.

He said that despite myriad challenges, he did never compromise with the Pakistani rulers. Finally, this great leader of the Bangalees declared country’s Independence on March 26, 1971.

For his extraordinary contributions towards achieving independence, Bangabandhu and Bangladesh emerged as a unique symbol to the people of Bangladesh. Therefore, the name of Bangabandhu would remain in golden letters forever in our history, he said.

Hamid mentioned that just after independence, Father of the Nation devoted himself to reconstruct war-torn Bangladesh and emphasised building diplomatic relations with friendly countries and world community as well.

Bangabandhu adopted the country’s foreign policy dictum ‘Friendship to all and malice towards none’, said Hamid.

He said that it was foremost duty of all to make young generation with the noble spirit of patriotism so that they can lead the nation towards prosperity and be able to materialise Bangabandhu’s dream to transform the country into ‘Sonar-Bangla’ (Golden Bengal).

“Let us put our sincere endeavour to flourish the noble qualities and intrinsic values of our children from their very childhood as they can love our country and her people. Let us inspire the young generation with the deep sense of patriotism possessed by Bangabandhu throughout his life.”

He also urged all irrespective of party affiliation to work in unison for building a happy and prosperous nation as well as the bright future for the children.

Prime Minister Sheikh Hasina in her message said that from his boyhood, Bangabandhu was fearless, courageous and humane,  and he had an extraordinary intelligence.

He was a visionary leader and possessed sharp memory. Bangabandhu was politically conscious and defiant.

The quality of leadership had grown in his character from his juvenile days, she added.

Hasina said that Bangabandhu led the nation in all the movements and struggles of the Bangalee nation, including the Language Movement, during his long political career.

Bangladesh emerged as an independent country breaking the shackle of subjugation and Bangalee nationalism flourished under his indomitable leadership.

She mentioned that Bangabandhu was the leader of the oppressed and deprived masses of the world and an instrument of realising their rights and emancipation.

His appealing and charismatic personality had united the entire nation in one string.

After achieving independence, Bangabandhu devoted himself to rebuilding the country.

But the anti-liberation and reactionary forces brutally killed Bangabandhu along with the members of his family to halt the spirit of the Liberation War and development spree, she added.

Through this brutal killing, the democratic march of the country and its development were halted.

Our constitution, one of the best in the world, was mutilated by the military usurpers. Anti-liberation forces and war criminals were rehabilitated. The countrymen were deprived of their rights to food and votes.

The country’s constitution and rule of law were trampled. The history of the country’s independence and war of liberation was distorted, the Prime Minister said.

However, she said, through the execution of the punishment pronounced by the highest court of the soil to the killers of the Father of the Nation, the Bangalee nation was freed from the stigma at least to some extent.

Efforts are underway to bring back home the remaining absconding killers to implement the verdict.

She also mentioned that Bangabandhu had an endless adoration for the children.

That is why, the day has been declared as the National Children’s Day.

“On this day, I pray to the Almighty Allah for the peace of the departed soul and a prosperous future for our children and juveniles,” she said.

On the eve of the National Children’s Day, she called upon all to vow to turn the country into a safe abode for the children.

The children would have to know the history of the struggling life of Bangabandhu to build their personality, and make them self-confident and awaken their patriotism, she viewed.

“Let us come and dedicate our present for the welfare of the future of the children. Let us work together being imbued with the ideals of the liberation war and turn Bangladesh into Sonar Bangla as dreamt by Bangabandhu sinking all differences.”

President Abdul Hamid and Prime Minister Sheikh Hasina will pay homage to Father of the Nation Bangabandhu Sheikh Mujibur Rahman by placing wreaths at his grave at Tungipara marking his 94th birth anniversary at 10:00 am.

Later, Prime Minister Sheikh Hasina will attend children gathering, discussion and cultural programme at Bangabandhu Mausoleum Complex at 10.45 am. She will also inaugurate a book fair there on the occasion.

Besides, ruling party Awami League, its associated bodies, socio-cultural and political organisations and ministries chalked out elaborate programmes to mark the day in a befitting manner across the country.

The ruling Awami League will organise a discussion on marking the Bangabandhu’s birth anniversary at Bangabandhu International Conference Centre on March 18.