Bangladesh Ambassador in USA Akramul Qader met with US Congressman Keith Ellison a member of the House Committee on Financial Services on Thursday in Capitol Hill.

Ambassador Qader and Congressman Ellison discussed the ongoing war criminal trials and labour safety and labour rights in Bangladesh. Bangladesh Ambassador informed that the International Crimes Tribunals of Bangladesh (ICTBD) is only trying those who allegedly involved in the crimes against humanity during the liberation war in 1971, none brought to the trial for his political faith or affiliation, says a press release. 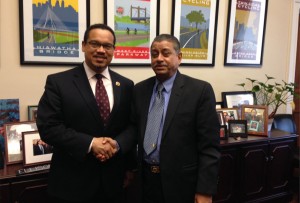 He added that, the ICTBD trials are open and transparent; most uniquely provides the right to appeal to the full bench of the Appellate Division of the Supreme Court. During the discussion, Bangladesh Ambassador briefed him on the series of steps taken by the government to ensure labour safety and labour rights in Bangladesh. He informed that Bangladesh Government recently passed Bangladesh Labour (Amendment) Act-2013, now, focusing labour safety, a national committee and a working group have been relentlessly working to formulate the rules under the Acts.

Among other initiatives Bangladesh Government adopted National Occupational Safety and Health Policy, established a Task Force on Building and Fire Safety, upgraded and strengthened the office of the Inspector General of Factories and Establishments, initiated assessment of the structural integrity of all active RMG factories, established worker fire safety hotline and establishing public accessible database on safety issues in ready-made garment factories. All possible steps have been taken by the government but a complete transformation should not be expected overnight, he added.

The Congressman appreciated the progresses Bangladesh has been making in various areas. In response to an invitation to visit Bangladesh, Congressman Ellison expressed hope that he might pay a visit in not too distant future.