Strengthening the cultural connect with neighbouring Bangladesh, the Visva Bharati University at Santiniketan in West Bengal is in talks to set up an exclusive centre at the campus, an official said Thursday. 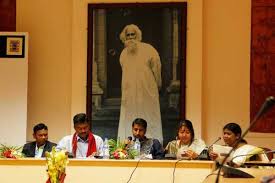 After centres were established by the governments of Japan and China at the campus, the varsity officials are chalking out plans for a proposed Bangladesh Bhavan following a visit from Bangladesh government officials this week.

“Yes we are discussing about the set-up. It will be primarily aimed to foster cultural exchanges,” Sabujkoli Sen, the university’s media interface committee’s chairperson, told IANS.

The varsity, located in the sylvan surroundings of Santiniketan, was founded by poet and Nobel laureate Rabindranath Tagore. Between 1890 and 1901 the bard spent a part of his life managing his family estate in Shelaidaha Kuthi Bari (country house), in Kushtia district, which is now in Bangladesh.

Some of his memorable poems, essays and short stories were composed during his stay at the country house.

A part of the centre will be dedicated to Sheikh Mujibur Rahman, the founding father of Bangladesh, said Sen.