Blessed with scenic beauty, low hills, forest, large lakes, beautiful rivers in deltaic plains, the longest beach on earth, a God-gifted geo-strategic location between SAARC and ASEAN and a homogeneous culture, Bangladesh is an ideal place for tourists.

It has a host of tourist treasures to offer to the international tourists — beaches, lakes, rivers, hills, forests, wildlife, tribal life, archaeological remains, including historical monuments, folklore, religious and cultural heritage, handicrafts and much more.

It has the world’s longest sea beach of the world and some archaeological sites representing ancient Buddhist civilization. 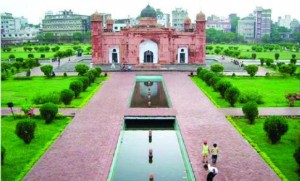 In recent times with the gradual development of infrastructure facilities and increasing exposition, Bangladesh is fast emerging as an attractive tourist spot on the global map.

Our tourist attractions are widely spread throughout the country.

The country’s historical legacy is composed of various strands — including Islamic, Hindu, Buddhist and British. There are 7 divisions and 64 districts in Bangladesh.

There are many tourist packages which offer different kinds of sightseeing opportunities.

Visitors can get cheap deals on flights to Dhaka throughout the year, and once there, the cost of living is among the lowest in the world, making Dhaka, and Bangladesh as a whole among the best value destinations in the world.

A few interesting and a must see destinations are listed below.

Sights in and around Dhaka city

The city was founded in 1608 as the seat of the Mughal viceroys of Bengal and known world over for centuries for its fine muslin.

Dhaka has now grown into a bustling city of over 15 million people and serves as the nation’s capital.

It is known as the city of mosques.

The Central Shaeed Minar commemorates the martyrs of the historic language movement of 1952. Bhahadur ShahPark, the memorial for the heroes of Sepoy Mutiny of 1857.

The NationalMuseum houses an excellent collection of archaeological finds, sculptures and paintings. Architectural trends, both traditional and contemporary, are reflected in Curzon Hall, High Court and new Supreme Court Building.

The oldest section of the city runs along the north bank of the waterfront and was developed when Dhaka was a significant Moghul trading center.

A must-see in the OldCity is the area between the two main water transport terminals, Sadarghat and Badam Toli where the panorama of river life on the Buriganga is particularly fascinating.

Along the waterfront is the old baroque-style palace, Ahsan Manzil which has been painted bright pink. Sonargaon, is located about 20 miles east of Dhaka, was capital of the region between13th and early 17th centuries and and retains historical relics of interest.

The second largest city of Bangladesh and a busiest sea port in Bangladesh. Its green hills, forests and sea-beaches attract holiday makers. Many of the heavy, medium and light industries are located here. These include jute, cotton, textile, automobile, fertilizer, engineering, chemical, tobacco, timber and tannery industries. retains historical relics of interest. RajendrapurNational Park, 30 miles north of capital is noted for varied bird life.The country’s only steel mill and oil refinery are also located here. Places of interest in and around Chittagong include Shahi Jame Mosque, Chandpura Mosque, Sitakunda Hindu and Buddhist temples, Foys lake etc. The Shahi Jama-e-masjid and Qadam Mubarak Mosque are two of the most impressive buildings in the city. It’s also worth visiting the EthnologicalMuseum in the ModernCity which has interesting displays on Bangladesh’s tribal peoples.

Miles of golden sands, towering cliffs, surfing waves, rare conch shells, colorful pagodas, delightful sea food — this is Cox’s Bazar, the tourist capital of Bangladesh. Here the world’s longest unbroken smooth straight 120 km long clean sandy beach slopes gently down to the blue waters of the Bay of Bengal with a background of chain hills covered with deep green forests. The amazing beauty of the golden sun setting behind the waves of the sea is very charming. The attractive local variety of handloom products of the Rakhyne tribal families are good buys. Their unique way of life and costumes attract visitors. Cox’s Bazar tourist resort has a Golf course in addition to varied other tourist facilities. Visits to the attractive spots at Inani, Himchari, Teknaf, the southern most tip of Bangladesh, Buddhist temple at Ramu and nearby islands of Sonadia, Moheshkhali and coral island St. Martin are memorable experience of a lifetime.

It is the only beach in Asia where one can enjoy both clear sunrise and the sunset in their entire majestic splendor. Kuakata in Patuakhali district is one of the few tourist spots in Bangladesh where nature survives in pristine, unspoiled grace. With its unspoiled vast sea shore along groves of coconut trees, colorful Rakhyne tribal life, Shima Temple having 70 feet high statue of Buddha, the highest in Asia, thousands of varieties of fish and the holy yearly Hindu Rush festival are added attractions in Kuakata for the visitors.

The three hill districts of Rangamati, Banderban and Khagrachari are inhabited by number of distinctive enterprising tribes like the Chakmas, the Tripuras, the Murang and the Marmas — all preserving their age old cultures, colorful rituals, dances and music. Here the glistening greenery sits on the purple hills around lakes-manmade and natural.

Sylhet is known as the “land of two leaves and a bud,” with its terraced tea gardens, rolling countryside, colorful Khasia and Manipuri tribes, eye-catching orange groves and pineapple plantations, tropical jungles and exotic flora and fauna will attract you. Sylhet tea is used the world over. The gardens in the area produce millions of pounds of tea every year, mostly for export. The district is also known, for its delicious pineapples and oranges. Maulvi Bazar, Chaftak, Jaflong and Fenchuganj are some of the other interesting places to visit. It is also known as the land of the famous Muslim saint Hazrat Shah Jalal (RA) the great torch bearer of Islam to this region. Sylhet is also well-known for its wide variety of exquisite hand-crafted products made out of cane and bamboo. Sylhet is linked with Dhaka buy rail, road and air.

Srimongol is known as the tea capital of Bangladesh. For miles and miles in all directions, the visitor can see the tea gardens spread like a green carpet over low lying land and slopping hills. A visit to the tea plantation in Sylhet, especially in Srimongol is a memorable experience.

Situated amidst splendid panorama, Tamabil is a border outpost on the Sylhet-Shilong Road, about 55 km away from Sylhet town. Besides enchanting views of the area, one can also catch a glimpse of rolling stones across the border from Tamabil. Jaflong is a scenic spot nearby with tea gardens and beautiful rolling hills.

A three-hour drive south-east of Sylhet and about three km from Dakhinbagh Railway station there is famous remote waterfall of madhabkunda which attracts large number of tourists every year.

The most attractive tourist spot in Comilla is Mainamati. About eight kilometers west of the town among the range of low hills known as Mainamati-Lalmai ridge. It is famous as an important center of Buddhist culture from the 7th to 12th centuries; the buildings excavated here were made wholly of baked bricks. Nearby is a museum housing the finds excavated here, which include terracota plaques, bronze statues, a bronze casket, coins, jewelries and votive stapes embossed with Buddhist inscriptions.

Located about 320km south-west of Dhaka, Khulna is the country’s third biggest city. It serves as the gateway to the port of Mongla and Sundarbans. A journey by paddle steamer from Dhaka to Khulna along the southern river system running through the green countryside is an unforgettable experience. About 32km from Khulna are the popular tourist attractions of Khan Jahan Ali’s 60 domed ancient Mosque (1459 AD) and his mausoleum at Bagerhat.

Bangladesh owns the largest mangrove forest on earth, the Sundarbans — the home of the majestic Royal Bengal Tiger. About 6,000 sq. km. of deltaic swamps along the coastal belt of Khulna, the Sundarbans is also the natural habitat of spotted deer, crocodiles, monkeys, cheetahs, pythons, wild boars and different species of colorful birds making it a paradise for the eco-tourist.