K. H. Masud Siddiqui, Secretary, Ministry of Liberation War Affairs and Independent Director and Chairman of the Audit Committee of BATB received the honor on behalf of the organization. 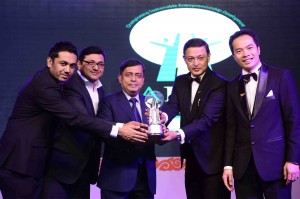 BATB was nominated for the coveted award for its flagship Afforestation Program. BATB has planted more than 79 million saplings since 1980, which is probably the largest private sector driven afforestation program in Bangladesh. BATB also won National Awards for Tree Plantation from the Government of Bangladesh in the year of 1992, 1999, 2002, 2005 and 2007.

The award aims to bring together Asia’s leading minds and businesses, providing priceless networking opportunities coupled with the best opportunities, to share ideas, network and discover new ventures and opportunities in the Asian entrepreneurial landscape. Enterprise Asia, the top-notch institution on entrepreneurship development based in Malaysia, declares the award every year.

The AREA award declaration started from 2009 and Asia’s best corporate conglomerates have been awarded so far.