Ms. Selima Ahmad MP, President and Founder of Bangladesh Women Chamber of Commerce and Industry (BWCCI) and the Vice Chair person of Nitol-Niloy Group  has been nominated as a "Leadership Champion" by the WORLD BANK GROUP for the Women Entrepreneurs Finance Initiative (We-Fi) for the period June 2020 – May 2022 for her lifelong mission to empower women and extra ordinary contribution to promoting women’s economic empowerment in

Bangladesh. This news has been officially declared by the Head of Women Entrepreneurs Finance Init...

Speakers in a pre-budget webinar emphasized on various aspects of health finance and urged for increasing development cost in health management. The webinar was held at the liaison office of Begum Rokeya University, Rangpur on Thursday organized by Dr Wazed Research & Training Institute, Begum Rokeya University, Rangpur, Eminence Associate for Social Development, Bangladesh and Digital Healthcare Foundation. Dhaka University’s former Professor of the Dept. of Management Studies Dr Md. Mohiuddin who is currently working as Professor at School of Business of Ahsanullah University of Science & Technology presented the main

The World Health Organization (WHO) officially declared the corona-virus (COVID-19) outbreak a global pandemic on 11 March, which has now spread to 170 countries & territories and infected over 330,000 people. This number does not adequately show the scale and magnitude  of this global crisis, which not only related to public health but also the health of the global economy.

The Executive Committee of the National Economic Council (ECNEC) today approved a total of eight projects involving Taka 10,468.24 crore including a first revised project for constructing Bangabandhu Sheikh Mujib Railway Bridge over River Jamuna with an additional cost of Taka 7,046.88 crore. The approval came from the 21st ECNEC meeting of the current fiscal year held at the NEC Conference Room in the city’s Sher-E-Bangla Nagar area with ECNEC Chairperson and Prime Minister Sheikh Hasina in the chair, reports BSS.

The National Board of Revenue (NBR) has initiated a move to scrutinize the proper use of Electronic Tax Identification Number (ETIN) while buying or selling of flats and land as well as to ascertain the actual value of those. 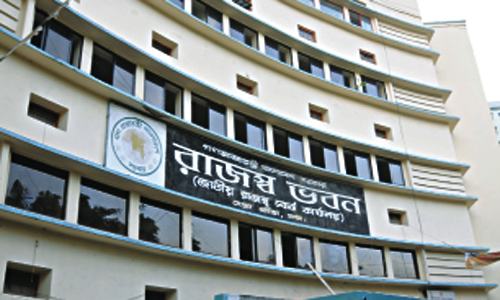 The income tax officials under various intelligence units of different tax zones would conduct surveys at the sub-registry offices from the beginning of the next year to this end. Talking to the BSS, NBR member (tax survey) Meftah Uddin Khan said that the ETINs are not often shown properly while...