Bangladesh has made a strong pitch for releasing more waters from the Gajoldoba reservoir of the Teesta in Jalpaiguri district to augment its flow into the country.

The Bangladeshi delegation at the two-day Indo-Bangladesh Joint Committee Meeting that concluded here on Wednesday highlighted the plight of farmers and fishermen suffering due to the Teesta shrinking to a tenth of its normal flow as it enters Bangladesh. But, no assurances were given from the Indian side, which only said that Bangladesh’s “concerns have been noted”. 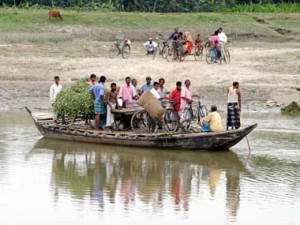 The closed door meeting, attended by representatives from Bangladesh and the governments of West Bengal, Assam and Tripura, the BSF and Bangladesh Border Guards as well as officials of the water resources ministry, discussed many technical issues related to the Ganges and water sharing, reports ToI.

“We raised the Teesta issue and requested the Indian side to inform the appropriate authorities in New Delhi as well as West Bengal about the ground situation in Bangladesh arising out of the reduced flow of the Teesta,” said leader of the Bangladeshi delegation Sajjad Hossain. Issues relating to a few other rivers that flow from India to Bangladesh were also discussed at the meeting.The two sides exchanged notes on anti-erosion measures to be undertaken along the banks of the Ganges and discussed technical issues.

“We shall meet again and finalize a joint report that will be submitted to the governments of the two countries,” said Farakka Barrage Project GM Saumitra Kumar Haldar, who led the Indian delegation.