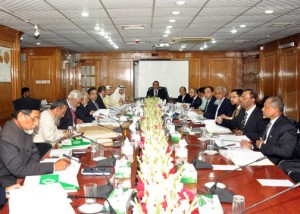 The meeting approved the Profit and Loss Account for the year 2013 and Balance Sheet as on 31 December 2013. The 31st Annual General Meeting will be held on May 31, 2014 at Bangabandhu International Conference Centre. The Record date for Dividend has been fixed on April 30, 2014.

It was also decided that the annual profit rate of Mudaraba Perpetual Bond of the Bank is 12.8% for the year 2013 which is the sum of 11% final rate of profit of 8 year term Mudaraba Savings Bond and 10 % of the declared Dividend. The Profit of the Bond will be distributed within 30 days from holding of Annual General Meeting of the Bank.

The meeting expressed it’s satisfaction while evaluating the performance of the Bank over the success & progress achieved so far and took some important business decisions.