The five-time world champions are yet to claim the title on home soil after falling at the final hurdle to Uruguay in 1950 and the Chelsea defender believes it’s their turn to take the crown. 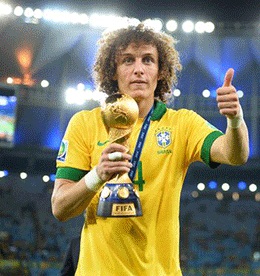 “We need to win the World Cup,” he told the Daily Mail.

“I’m very excited. I think it will be a great World Cup for everyone, but for Brazilian people even more.

“They have been waiting for this for more than 50 years, so I’m very excited for my generation.

“There is a lot of pressure on us, we’re working very hard and we have a great opportunity because we’re playing at home. There will be more pressure on us than the other countries.

The 26-year-old has become a vital part of the side since cementing his place alongside Thiago Silva in defence following coach Luiz Felipe Scolari’s appointment in 2012 and was full of praise for the ‘Professor’.

“Scolari is a fantastic guy.

“He has a fantastic heart and he knows exactly when to he needs to say bad things and when he needs to give you a hug and be positive.

“He won a World Cup before so he knows what is required to win again.”

David Luiz was one of 16 European-based players Scolari has summoned for the Selecao’s Gillette Brasil Global clash with South Africa in Johannesburg on March 5.