With the spontaneous participation of people from all walks of life, the grand initiative to sing the national anthem of Bangladesh on the Independence day Lakho Konthe Shonar Bangla took place on Wednesday at the National Parade Ground. The national anthem of Bangladesh was performed to create an official world record in the presence of the Prime Minister Sheikh Hasina. Ministers of the cabinet, Members of parliament, Chiefs of the Army, Navy and Air Force along with other government officials were also present at the event. 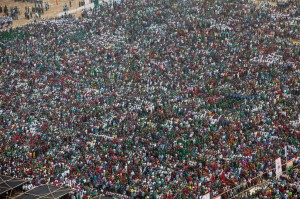 The national anthem “Amar Shonar Bangla, Ami Tomay Bhalobashi” was performed in unison at 11 AM. A cultural performance took place with the participation of nationally acclaimed artistes and musicians with the aid of BangladeshShilpakalaAcademy. The cultural event started at 8:45 AM and continued up until 12 PM. The performance of the national anthem took place in between the cultural events.

The official machine count of participants was 254,681. The organizers stated that all parameters set by the Guinness authority were fulfilled. Apart from the official count, an estimated total of more than 325,000 people participated in the program.

To ensure the perfect depiction of the national anthem, an audio CD of the standardized sung version had been provided ShilpakalaAcademy supplied to the respective organization. Organizations conducted rehearsals based on that standard. This initiative will play the role of a key catalyst of ensuring performance of the national anthem in full format and correct tune

The previous record of performing a national anthem in unison has created by Sahara India Parivar with the participation of 121,653. The Guinness Committee will inform the news of the news record after 1 week time. The record will be filed under “Most people singing a national anthem simultaneously” section.

The song written and composed by Rabindranath Tagore had been chosen as the country’s national anthem in a mass rally at Dhaka’s Paltan ground on March 3, 1971, two days after the ‘Kendriya Sangram Committee’ of Swadhin Bangla was formed.