In September 1999, the BBC launched an online poll to find the greatest thinker of the millennium. Karl Marx, a great German philosopher and pioneer of the international communist movement, topped the list, leading Albert Einstein, Isaac Newton and even Charles Darwin with a clear margin.

Born in the Rhineland city of Trier on May 5, 1818, Marx lived in an era of drastic transformation. In that year, Britain was planning to build the world’s first railway, Prussia initiated the establishment of a customs union, and French peasants continued to flee their homes into cities because of heavy taxation, reports XINHUA.

In the decades after his death, bourgeois governments introduced numerous reforms designed 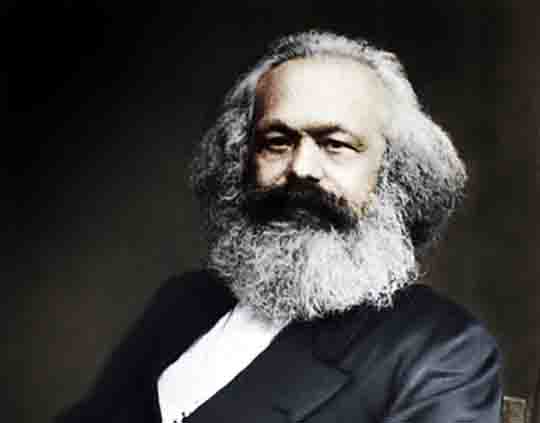 to improve the living standards of working people, including labor laws, minimum-wage legislation, and welfare benefits, which would have been labeled “socialism” in Marx’s day.

Though repeatedly being dispelled in his life, Marx has become more and more recognized in today’s world, especially after the 2008 financial crisis. People want an explanation. So they turn to Marx for the answer—he is not out; he is in. “READ KARL MARX ONCE MORE”

The 1972 Nobel literature laureate, German writer Heinrich Boll, once said, without the workers’ movement, without the socialists, without their thinker Karl Marx, more than five-sixths of those living today would still be living in a dull state of half-slavery. Boll may have found few followers in the West, but their number has been slowly yet steadily growing ever since.

In Marx’s motherland, Wolfgang Gehrcke, deputy chairman of the DIE LINKE in the Bundestag and member of the party executive of DIE LINKE, found more people now in Germany are talking about Karl Marx after the 2008 financial crisis.

“Many people went to the library and bookshop, and said please give me a Communist Manifesto, or a Das Kapital … They wished to read something about Marx,” Gehrcke told Xinhua recently.

“Also in our party, people said please read Marx once more; we must look into the society of Germany and Europe,” he added.

The film “The Young Karl Marx” was very popular in Germany. Gehrcke said when he went to see the film, he found the cinema was crowded with young people.

Meanwhile in Manchester, a British city which Marx visited almost every year since 1845, the zeal for things related to Marx or Friedrich Engels has been on the rise.

Tours about Marx and Engels’ footsteps in Manchester were very popular. The two tours scheduled for May 5, Marx’s birth anniversary, were sold out two months in advance, said tour guide Jonathan Schofield.

Having entered the tour business 21 years ago, Schofield said his tours have drawn an increasing number of young people.

The increasingly widening gap between the rich and the poor has apparently revived public interest in communist ideals, he said. “Maybe sometimes we think that this is just an old story, but no, it has a real echo, a real resonance for today as well, and young people appreciate that,” he told Xinhua.

“Every day, there is an article on Marx. Is it that Marx is outdated or not? We realize that Marx is relevant as long as there is a capitalist society,” he said.

“HAPPY BIRTHDAY, YOU WERE RIGHT!”

For Piotr Gadzinowski, editor-in-chief of Polish Tribune daily newspaper, Marxism is a philosophy through which people can understand the most important social and economic issues.

At the same time, it provides methods to solve these problems, he told Xinhua.

Michael Heinrich, professor at University of Applied Sciences Berlin, told Xinhua that “Karl Marx gave us a general theory of capitalism … And this general structure is still working today, and therefore the example looked old-fashioned, but the core, the theory is very up-to-date today.”

Besides, “Marx made a basic distinction between social form and material content … In the early 19th century what was changed was agriculture, in the late 19th century industrialization. Now it is digitalization. All these have changed on the side of the material contents, but the social form, to be a commodity, always remains the same,” said Heinrich, an exponent of what is known as the “New German Reading of Marx.”

In the opinion of renowned Cuban philosopher Isabel Monal, “Marxism has not been surpassed” by any other existing socioeconomic theory.

She said that Marxism is not written in stone. Rather it is a work in progress, “in permanent evolution with rectifications, enrichment and the appropriation of new knowledge” gleaned from studies and recent historical experiences, she said.

Cuba’s current reform program is an evidence of Marxism’s evolutionary process, “an evolution of the previous society—not a denial of what we have done so far, but a development leap,” she added.

Days before the 200th anniversary of Marx’s birth, The New York Times published a story titled “Happy Birthday, Karl Marx. You Were Right!” written by Jason Barker, an associate professor of philosophy at Kyung Hee University in South Korea and the author of the novel “Marx Returns.”

“Marx … does not offer a one-size-fits-all formula for enacting social change. But he does offer a powerful intellectual acid test for that change. On that basis, we are destined to keep citing him and testing his ideas until the kind of society that he struggled to bring about, and that increasing numbers of us now desire, is finally realized,” wrote Barker.

“CHINA IS A PERFECT MODEL”

Two centuries on, despite huge and profound changes in human society, the name of Karl Marx is still respected all over the world and his theory still shines with the brilliant light of truth, Chinese President Xi Jinping said Friday.

Xi, also general secretary of the Communist Party of China Central Committee, made the remarks at a grand gathering that marks the 200th anniversary of Marx’s birth.

Today’s world is faced with multiple challenges, ranging from wars and conflicts, poverty, climate change to extremism and terrorism. Countries across the globe have been seeking solutions to these challenges.

“Modern China is a perfect example,” said Gadzinowski. “Under the guidance of Marxism, Engels and the ideology of many other Marxists, not only does the Chinese Communist Party interpret the world problems, but also changes it by building socialism with Chinese characteristics, while, at the same time, enriching Marxism thought through Chinese experience and characteristics.”

Roland Boer, professor at the School of Humanities and Social Science of Newcastle University in Australia, attributed the superiority of socialism to the emphasis on justice and equality for everybody.

“I think that’s the wisdom of China’s reform and opening-up to realize the importance of that,” he said, while praising the achievements China has made in poverty reduction over the past 40 years.

Sun Xiguo, executive director of the school of Marxism, Peking University, said the ultimate goal of discussions on Marxism in modern China is to look for theoretical methods and practical approaches for facilitating people’s pursuit of happiness, rejuvenating the Chinese nation and building a shared future for the world.

Sun said one of the fundamental questions that need to be answered in the modern study of Marxism is how to address the social imbalance in development and how to turn people’s longing for a better life into reality.

“If Marxism in the 21st century can achieve this, it will surely be revived with enormous vitality,” he added.