Adilur Rahman Khan, a leading human rights lawyer from Bangladesh, has been selected as the honoree for the 2014 Robert F. Kennedy Human Rights Award, now in its 31st year. The award recognizes his courageous work uncovering the most serious human rights violations in Bangladesh and initiates a partnership to support his efforts to promote and safeguard human rights.

“From exposing the government’s role in enforced disappearances and extrajudicial killings to successfully campaigning for Bangladesh’s first law against torture, Adil has courageously fought to protect human rights, even in the face of grave personal danger,” said Kerry Kennedy, President of the Robert F. Kennedy Center for Justice and Human Rights. “We are inspired and humbled by his work protecting peace and dignity in his own nation and abroad, and we are proud to honor him with the 2014 Robert F. Kennedy Human Rights Award.” 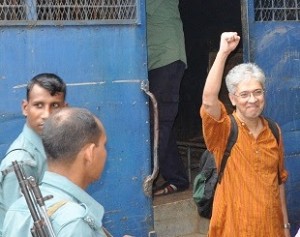 Mr. Rahman Khan is a tireless human rights defender and attorney who has been an activist for decades and established a nationwide network of human rights defenders in Bangladesh. As the Secretary of Odhikar, a human rights organization in Bangladesh, Mr. Rahman Khan leads one of the most trusted watchdog organizations in the country, monitoring an impressive scope of issues such as restrictions on freedom of expression, abuse by security forces, enforced disappearances, extrajudicial killings, torture, border killings, violence against women, and elections. Mr. Rahman Khan holds degrees in law from Dhaka University in Bangladesh and Vrije Universitiet in Belgium.

Mr. Rahman Khan was selected from a group of 70 nominees after a months-long process by a prestigious panel of judges: Dean Claudio Grossman, Professor of Law and Dean of American University, Washington College of Law; Ms. Maria Otero, former Under Secretary of State for Civilian Security, Democracy and Human Rights; Dr. William Schulz, President and CEO of the Unitarian Universalist Service Committee.

“I thank the Robert F. Kennedy Center for Justice and Human Rights for honoring me with this prestigious award,” said Mr. Rahman Khan. “This award is an acknowledgement of the tireless work of human rights defenders presently at risk. The people of Bangladesh joined the liberation struggle in 1971 to establish a democratic country, based on equality, human dignity and social justice. Their dreams remain unfulfilled, as they now face extra judicial killings, enforced disappearances and torture and ill treatment in custody. Human rights defenders are persecuted and the freedoms of media and association are curtailed. This award will contribute to highlight these violations in my country; and will encourage and empower the human rights defenders and victim families associated with Odhikar to continue the struggle for human rights, social justice and democracy.”

In recent years, the government of Bangladesh has increasingly clamped down on civil society groups’ activities, including those of Mr. Rahman Khan and his organization. Particularly since 2012, the human rights situation in Bangladesh has deteriorated as the government has consolidated power and criticism from civil society has been met with repression. In this context, human rights defenders, whistle-blowers, and journalists exposing human rights abuses to the public are particularly targeted. The government has blocked the release of funds for Odhikar’s human rights projects and has arbitrarily placed the organization under investigation. Additionally, Mr. Rahman Khan and his colleague are currently facing a trial on trumped-up charges of “fabricating information” and “damaging the image of the state” because of their human rights work.

As the space for Bangladeshi civil society to operate freely is rapidly diminishing, Mr. Rahman’s human rights work is critical in holding the government to account and exposing abuse by security branches of the government.

The Robert F. Kennedy Human Rights Award was established in 1984 to recognize those individuals who stand up to oppression at grave personal risk in the nonviolent pursuit of human rights. The Human Rights Award Laureates have made significant contributions to their countries through years of dedicated work. Laureates are chosen through an exhaustive annual nomination and selection process with nominations submitted from all over the world.

About the Robert F. Kennedy Center for Justice and Human Rights

The Robert F. Kennedy Center for Justice and Human Rights is a 501 © (3) nonprofit charitable organization.