2020 is the centenary year of Bangabandhu’s birth and the 9th Anniversary of the banning of corporal punishment in Bangladesh schools and madrassahs – both significant in their own right.

Bangabandhu (1920/03/17 – 1975/08/15) was a member of an elite group of men who changed the course of history and indelibly carved his name in marble. Among others to have done so were Abraham Lincoln, Mahatma Gandhi, Martin Luther King, Michael Collins, John F. Kennedy, and more recently Nelson Mandela, to mention a few.

Of all his many outstanding attributes, the one that gets my five-stars admiration and loudest applause is his abhorrence of corporal punishment. Like all learned men, it made no sense to him, not only was it an exercise in futility, but caused abhorrent suffering, both mental and physical damage. 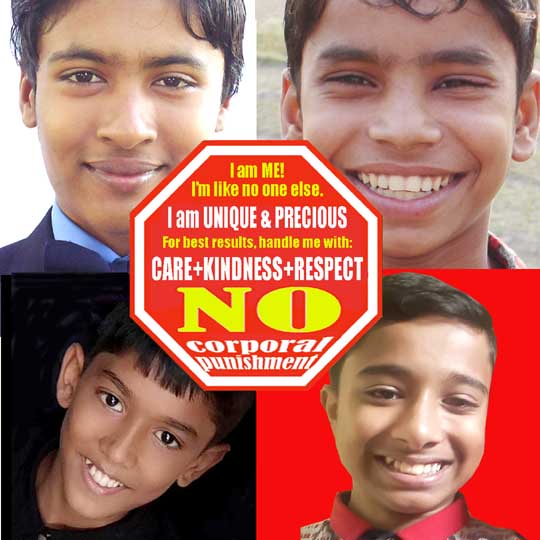 Another great Bangladeshi and writing genius was poet Nobel Laureate Rabindranath Tagore (1861/05/07 – 1941/08/07). Among the 2230 songs and countless words he wrote, the eight words most resonant in the heads of all good parents, good schoolteachers, and Imams today, are:

“To discipline means to teach, not to punish”.

If every parent, schoolteacher, and Imam knew, remembered, and applied that simple truth alone, Bangladesh would benefit enormously. When you teach a child, you teach the adult they become. Violence should never be demonstrated to a child in school, madrassah or home, or violent adults they will become.

Shamefully, sad… many school ‘teachers’ and Imams are law-breakers who still engage in the despicable use of corporal punishment to cover their own inadequacies as competent teachers despite the overwhelming evidence against the practice and the High Court of Bangladesh ruling of 2011.

If we cannot see the damage corporal punishment does to children, there’s little hope of Bangladesh ever achieving its greatest potential.

On January 13, 2011, the High Court of Bangladesh made it very clear that corporal punishment was an archenemy of the state.

Justice Md. Imman Ali and Md. Sheikh Hasan Arif outlawed the inhuman, ineffective, ignorant practice in schools and madrassahs throughout Bangladesh, declaring it to be: ‘cruel, inhuman and degrading treatment and a clear violation of a child’s fundamental right to life, liberty and freedom’.

Anyone with an iota of intelligence could easily figure out that kicking, grabbing, shoving, slapping, pushing, pinching, pulling a child’s hair, tugging at their ears, belittling, mocking and robbing them of their dignity, could not help in their development to become upstanding citizens. And those activities mentioned are at the lower end of the scale: there are worse, much worse.

Last year, a young boy needed surgery after a ‘teacher’ had kicked him in the genitals. Where is the justification for such an horrific evil act? Is that going to help him achieve better exam results and make him an outstanding citizen? I doubt it.

Any government that bellows the hackneyed adages “children are the future of the nation”, and “the supreme assets of the nation,” and does not do all in its power to prevent corporal punishment and protect its most precious resource, needs to have a serious rethink about the society it is creating.

The very foundation of the nation (any nation) is built on education. Schools are the mental gyms where young developing minds are rigorously exercised and prepared for universities and far beyond.

Teachers are the traffic police who initially advise, direct, and guide us, to our true destinations in life. Giving children the wrong direction can have catastrophic effects.

There are REMARKABLE teachers around the world – some in Bangladesh – who are performing EXTRAORDINARY work for the benefit of the children and society at large.

The most common ambition of loving parent is to make life better for his/her child. They want them to have more opportunities than they ever did and not go through the pain, heartaches, suffering and struggles to survive as they did… because they love them.

Corporal punishment is a hindrance to a child’s development. It has been proven beyond a shadow of doubt scientifically that it has has no benefits whatsoever – NONE!

If we in Bangladesh are ever to achieve the status of Sonar Bangla and fulfill Bangabandhu’s dream, the most logical place to begin is in schools and rid them of all the destructive elements that shackle progress.

Good education is the solid foundation of every nation and without it nations are guaranteed to decay and crumble.

How is it possible for a rose to mature, accomplish its Heavenly destiny and bring forth untold joy, if a thug is beating its petals with a baseball bat? Corporal punishment must stop.

The greatest birthday present ‘teachers’ and Imams in Bangladesh can give Bangabandhu, individually and collectively, on his 100th birthday anniversary this March17, would be to amend their ways, abolish corporal punishment in its many forms, and stop damaging his children – the future of Bangladesh… the supreme assets of the nation.

Good luck to Education Minister Dr. Dipu Moni MP, in her efforts to bring about the education system Bangabandhu would want and Bangladesh should have.

(Sir Frank Peters is a former newspaper and magazine publisher and editor, an award-winning writer, a royal goodwill ambassador and humanitarian).