Welcoming the guests, the Chairman-BIAC acknowledged the economic growth of Bangladesh over the past decades which is expected to rise further. He highlighted the role of an ADR Institution in enhancing economic growth through building a business friendly environment. 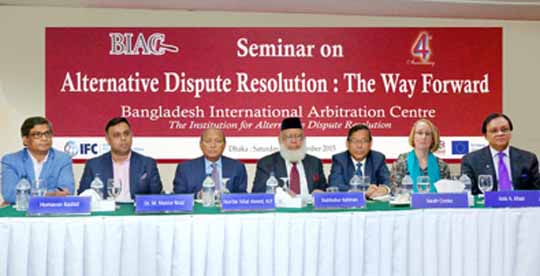 Over the last four years BIAC has conducted numerous training courses in Arbitration and Mediation and organised various outreach programmes on ADR. Observing a high interest from different organisations to be associated with BIAC, it has announced the launch of its Membership Panel. Chairman-BIAC thanked all who supported BIAC.

Special Guest Hon’ble Mr. Anisul Huq, MP, Minister for Law, Justice & Parliamentary Affairs, accredited BIAC for its effort and commitment to promote ADR in the country. He further mentioned that the Law Ministry is making all out effort to finalise the Mediation Rules to complement the Civil Procedure Code and the possibility of recognition of ADR institutions, such as BIAC, in the said Rules. He also mentioned that the Government has instructed inclusion of arbitration clause in every government contracts that has a value of up to US$ 50 million and to hold the arbitrations in Dhaka alone.

Hon’ble Tofail Ahmed, MP, Minister for Commerce as the Chief Guest at the Seminar congratulated BIAC on successfully completing four eventful years. He acknowledged that inclusion of ADR clauses in government contracts is a common practice in developed and developing countries, including Bangladesh and suggested the adoption of ADR under BIAC Rules in such cases. He also thanked ICCI-Bangladesh; DCCI and MCCI, Dhaka for setting up this Centre under private sector initiative.