Facebook founder Mark Zuckerberg thinks access to Internet can help lift up more than 10 million people in Bangladesh out of poverty.

Zuckerberg, in a Facebook post yesterday, said: “Research shows that for every 10 people who gain access to the internet, at least one person is lifted out of poverty. This is because the internet brings access to jobs, education and health information, and valuable communication tools.”

Internet.org is a non-profit platform of Facebook and allows free online browsing through mobile gadgets.

The CEO of the world’s most popular social media platform wrote the post on the occasion of launching Internet.org in Bangladesh on the network of Robi, terming it “another step towards connecting the world”.

“Bangladesh has more than 170 million people, but fewer than 10 percent are connected to the Internet,” he said.

“We have the opportunity to lift up more than 10 million people in Bangladesh and hundreds of millions around the world.” 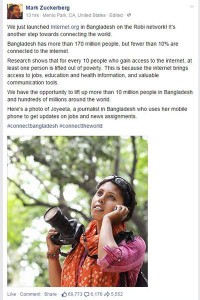 Along with his post, Zuckerberg posted a photo of Bangladeshi photojournalist Joyeeta Roy, who, he wrote, “uses her mobile phone to get updates on jobs and news assignments”.

On March 10, Bangladesh became the 10th country in the world to offer free internet access to some local and international websites through internet.org.

The service was launched for 23 websites initially, in association with the government’s ICT division and mobile phone operator Robi.

Only Robi subscribers will enjoy the service. However, users will not be able to open links, and upload or download any image or video free of charge.

The service has initially been launched for 90 days but it will be extended, Robi officials said.

Internet.org was founded on August 21, 2013, to ensure easy access to internet globally. It was earlier launched in Colombia, Ghana, Tanzania, Kenya, India, Zambia, Indonesia, Guatemala and the Philippines.