Government subsidy of up to Tk 75 crore a year, meant to support LP gas (cooking gas) consumers, is being eaten up by a few middlemen for years.

Though these middlemen (dealers) are thriving at the expense of taxpayers’ money, the government has done little in the last five and a half years to correct the price of the Bangladesh Petroleum Corporation (BPC)-produced liquefied petroleum gas in line with the market rate, reports the Daily Star. 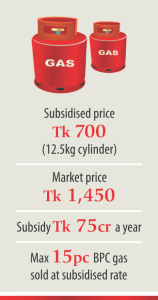 State-owned BPC sells a 12.5kg LP gas cylinder for Tk 700, while private companies sell a 12kg cylinder for Tk 1,450. This price gap of over 100 percent has been encouraging unscrupulous dealers to sell the entire lot of the BPC gas in black markets.

“Majority of your points is true. Dealers who sell both BPC and private companies’ gas eat up the benefits of the subsidised gas,” BPC Chairman Eunusur Rahman told The Daily Star.

Rahman said the armed forces, police and some government agencies got the gas at Tk 700 a cylinder. But BPC officials said it was only 12 to 15 percent of the total gas the BPC sells per year. So, 85 percent of BPC’s LP gas is pocketed by unscrupulous dealers who sell those at market rate more than double the BPC price.

“We had submitted proposals several times to hike the price, but they were not accepted,” said the BPC chairman.

Currently, the yearly consumption of LP gas in the country is 1 lakh tonnes — 80 percent of it imported and the rest produced by the BPC. Local companies Bashundhara and Jamuna Spacetech and French TotalGaz and Australian Kleenheat sell cooking gas by importing it.

Not that the government officials are unaware that middlemen are gobbling up all the subsidies. Yet, the authorities have repeatedly declined to adjust the price upward in line with the market price. At the moment, the gap between government price and market price of a 12kg cylinder is over Tk 800.

Though private players adjust the price in line with the international market price, the BPC did not do so in the past five and a half years. The last time it adjusted the price downward to Tk 700 from 850 was in June 2009. The price cut was made to help BPC compete with private companies that were selling gas at Tk 750-800 a cylinder at the time.

Since then private companies have increased the price several times.

“Apparently, you won’t get the BPC gas in any dealer’s shop. They erase BPC’s name from the cylinder and sell it at market price,” said a senior official of BPC’s LPG Plant in Chittagong.

He said he wanted to rebrand the product to stop the malpractice by dealers and help consumers get it at the subsidised rate.

Analysts say there is no reason behind continuing the subsidy when the BPC cannot intervene in the market and when consumers do not get its benefit.

“It is tough to intervene in the market with 15-20 percent share. It can hardly create any impact on the market,” said Prof Mustafizur Rahman, executive director of Centre for Policy Dialogue. “So, the government has to rethink about the subsidy on LP gas.”

He also pointed out the issue of selling BPC gas in black markets, which is illegal.

India, which was facing an identical problem, has devised a way out to give the subsidy to the targeted consumers. Now a cooking gas consumer gets Rs 435 directly in his bank account when he books for an LPG cylinder. But the consumer has to buy the gas at the market price.