A one month long Training Course on “Bank’s Audit & Inspection” for the Officials of Pubali Bank Ltd. jointly organised by Human Resources Division of the Bank and Bangladesh Bank Training Academy (BBTA) was held recently. 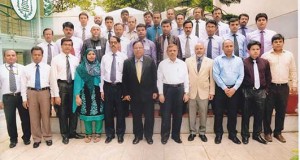 In His speech, Managing Director of Pubali Bank Ltd. Helal Ahmed Chowdhury thanked Executive Director of BBTA Md. Ataur Rahman and BBTA authority for arranging the course for the Officials of Pubali Bank. Mr. Chowdhury termed audit as complementary to banking and urged officers to pay much importance. He said, auditors will have not only to find fault of the branches at the time of auditing but also to give guidelines so that the faults never to be happened again. He advised all officers to abide by the rules and regulations of Bangladesh Bank and other regulatory bodies. He also said, everybody has to pay special attention so that the objections filed in the various audit report of the branches would never happen in next time. Answers to the objections of audit have to be clear and based on data for the settlement in a quick time, he added.

In His speech, Executive Director of BBTA Md. Ataur Rahman said, this course for Pubali Bank has specially enriched with audit related data that will ultimately help the officers. He thanked the trainees for participating in the course and told them to utilize the knowledge acquired here in profession.

A.B.M. Zahurul Huda, DGM of BBTA was the Course Director. Deputy Directors of BBTA- Ahmed Zubaer Mahbub and Md. Fazle Rabbi were in the course co-ordination team. 25 (twenty five) Officers of the bank participated in the Training Course.