Robi Axiata Limited has organized the prize-giving ceremony for its joint photography contest with DRIK, at the Drik Gallery in Dhanmondi on Thursday.

The awards ceremony is the culmination of a photography training campaign that was launched on the Robi Facebook Fanzpage (https://www.facebook.com/RobiFanz) on November 14, 2013. Abdullah Abu Sayeed, Chairman of Bishwa Sahitya Kendra was chief guest of the programme. 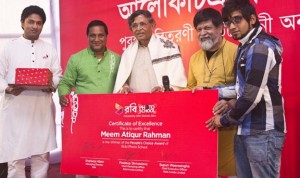 Each video had a separate theme e.g. Portrait, Street life photography, and Landscape, etc. Following each video on the RobiFanz page, Robi Facebook fans were invited to upload their own photos taken using the techniques taught, in the comment section.

The photos were transferred into an app through which the participants could collect ‘likes’ to win attractive prizes.

The first prize, won by Syed Hafiz Al Assad, was a 1-year scholarship at Pathshala (Drik Gallery). First prize was, however, based on judge’s choice rather than the most ‘likes’. The popular choice award winner of a Canon EOS 60D camera was won by Meem Atiqur Rahman, and the popular choice award runner-up winner of a Canon EOS 600D camera was picked up by Md. Neyamath Ullah Sikder. The final award was presented to Hasibul Hasan, who won an iPhone 5S in the Red and Green round.

All submitted images were displayed at a special exhibition at Drik Gallery in hanmondi. The exhibition will remain open for all 13 January 2014.