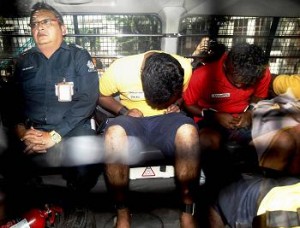 This handout photograph made available on December 17, 2013 by the Straits Times shows an officer (L) sitting next to arrested foreign labourers as they arrive in a police van at the Subordinate courts in Singapore. Singapore will deport 53 South Asian workers and pursue criminal charges against 28 others for their involvement in the city-state’s first riot in more than four decades, the government said December 17. SINGAPORE OUT AFP PHOTO / THE STRAITS TIMES / WONG KWAI CHOW
SINGAPORE OUT —- EDITORS NOTE —– RESTRICTED TO EDITORIAL USE MANDATORY CREDIT “AFP PHOTO / THE STRAITS TIMES / ” — NO MARKETING — NO ADVERTISING CAMPAIGNS – DISTRIBUTED AS A SERVICE TO CLIENTS — NO ARCHIVES NO INTERNET