The year 2013 has been one of the most challenging years for the country’s economy in recent times. Failure to implement the Padma bridge project, collapse of a garment factory killing over 1,100 people, US suspension of GSP facilities, large scale financial scams, unprecedented political violence, etc have been very damaging to the country’s image. 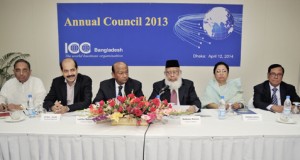 According to the Executive Board Report, against all odds, Bangladesh has been able to attain a GDP growth of 6.03% in FY13. Although this marks a drop in GDP growth rate for two consecutive years, growth of over 6.0% is quite respectable where the projected growth of developing countries is around 5.0% in 2013 said the annual market update 2013 of Citibank NA Bangladesh. The drop in GDP growth rate from 6.23 % in FY12 is mainly attributed to slowdowns in agriculture and service sector. The slowdown in agriculture sector from 3.11% in FY12 to 2.17% in FY13 is largely due to the base effect of two consecutive years of record growth and lower output due to the falling prices along with weather-related disruptions.

However, in the outgoing year, Bangladesh has successfully coped with the global challenges. Economic growth has also been largely inclusive and broad based, with food production keeping pace with the population growth, significant increase of per capita income  in real terms, poverty fell sharply to less than 31.5 per cent coupled with improved life expectancy, higher literacy rate and lower mortality. Population control programmes have also helped in slowing down population growth.  However, political confrontation during the third-quarter of 2013 resulted in tragic loss of lives of innocent people, in addition to huge economic losses, otherwise the country could have easily achieved more than 7% GDP growth.

Executive Board mentioned that according to recent World Bank reports Bangladesh has the potential to create at least 15 million jobs in the next ten years. The productivity of Bangladeshi workers is on par with Chinese workers in well-managed firms, with their wages being one-fifth of their Chinese counterparts (half those in Vietnam), reported the WB. The country’s unique competitive position comes at a time when China is in the process of outsourcing 80 million jobs from labour-intensive industries.

BGMEA President Atiqul Islam thanked ICCB President Mahbubur Rahman & all the members of ICCB for their unqualified support to BGMEA after the RanaPlaza tragedy. He requested ICCB president to organize a Round Table and discuss about the Plan of Action of BGMEA for worker’s safety, the support extended by the BGMEA to Rana Plaza victims, Compliance and how to become number one RMG Exporter in the world.

The Council adopted the Executive Board Report & Audited Financial Statements of ICC Bangladesh for the year ended 31st December.