At least 28 people have been killed in landslides triggered by heavy rain in Darjeeling, Kalimpong and Kurseong sub-divisions of Darjeeling district in West Bengal last night.

Most of the bodies of the victims were recovered while the rescue operation continues, reports BSS. 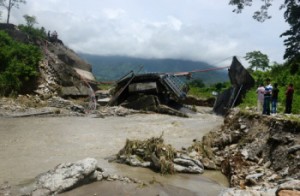 An officer of Shashatra Seema Bal (SSB) told reporters today that the landslides have caused extensive damage to national highways disrupting road communications and telecommunication between Darjeeling and Sikkim.

Twenty five landslips were reported in the three sub-divisions.

Two battalions of SSB have been sent to the landslide-hit areas and SSB personnel from border out posts are also being rushed for the rescue operation.