The second round of discussions for the BCIM corridor, an economic silk route between Bangladesh, India, China and Myanmar, will begin tomorrow at Cox’s Bazar.

The two-day meeting will discuss the scope and modalities of cooperation in sectors of goods and services, investment, energy, multimodal connectivity and sustainable development, a press release from Bangladesh foreign ministry said. 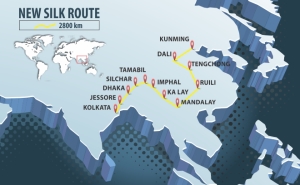 The “joint study group” meeting, organised by the government of Bangladesh, will be chaired by the host country’s foreign secretary, the press release said.

“The corridor is expected to unlock parts of the four countries towards reaping greater economic synergies, complementarities and upscale manifold economic opportunities,” it read.

The prime minister’s Foreign Affairs Adviser Gowher Rizvi had said the corridor fitted Bangladesh’s desire to become the hub of connectivity between South and Southeast Asia.

However, it is said that its implementation would require big investments.

The paper was presented at an inter-ministerial meeting in Dhaka on February 6.

The roads, railways, airlines, water route, telecom networks and energy pipelines along the Kolkata-Kunming route is expected to form a “thriving” economic belt.

The trade potential of the corridor stands at $132 billion, according to a study by Research and Information System for Developing Countries in India.

According to Bangladesh foreign ministry, the country can benefit immensely from it on arrears of energy, as it can purchase unused power from Sikkim in India.