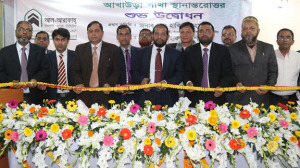 Among others Senior Vice Presidents of the Bank Engr. Md. Habib Ullah, S. M. Kowsar and Assistant Vice President Jalal Ahmed were present in the inauguration. A large number of local peoples, businessmen, clients and well-wishers participated on the ceremony. Manager of the branch A.T.M. Zaman thanked the audience.

Managing Director Md. Habibur Rahman said Al-Arafah Islami Bank Ltd. was established not for making profit buy doing business but for the welfare of the society. He invited all to have the blessings of Islamic banking service in the newly shifted branch. He also said, only Islamic banking system can boost-up the economy of the country.