The Mayor said “We are grateful to Airtel for bringing 3G in Khulna and hope that this will create opportunities in Khulna and will further develop Khulna in terms of education and health services.” 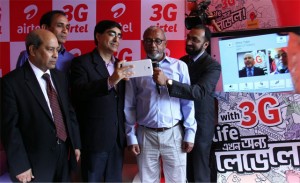 Chris Tobit said, “We are very excited to bring in 3G services to our valued customers in Khulna. Delivery of the most superior quality of experience and the expansion of Bangladesh’s 3G networks is our prime focus at Airtel Bangladesh Limited. We have already covered significant areas of the most important cities of the country; Dhaka, Chittagong, Sylhet, Gazipur, Narayanganj, Comilla, Bogra and now Khulna. This will connect Khulna to the rest of the world and will bring positive changes in the economy here. We are committed to cover the rest of the country’s divisional headquarters with 3G service by mid 2014.”

The Mayor and the other distinguished dignitaries toured through 3G Experience Zone where they witnessed large files being downloaded at high speed, video streaming on YouTube, application downloads and fast internet browsing through Airtel 3G dongles. The Honorable Mayor also made a video call under Airtel network in Khulna and interacted with a young university student through a 3G enabled device.

Airtel is set to introduce 3G services commercially in all divisional headquarters of the country by mid 2014. Areas which have been introduced under the 3G network in Khulna are Naval Staff Quarters, Boikali Bus Stop, Mujgunni Residential Area, Denarabad, Arambagh, Tootpara, Munshipara, Police Line, Kotwali and Rupsha Ghat. Airtel’s Valued Customers can check the list of 3G available areas by dialing *121*7*4#, dialing 1212 or visiting www.bd.airtel.com/airtel3G

Bharti Airtel Limited is a leading global telecommunications company with operations in 20 countries across Asia and Africa. Headquartered in New Delhi, India, the company ranks amongst the top 4 mobile service providers globally in terms of subscribers. In India, the company’s product offerings include 2G, 3G and 4G wireless services, mobile commerce, fixed line services, high speed DSL broadband, IPTV, DTH, enterprise services including national & international long distance services to carriers. In the rest of the geographies, it offers 2G, 3G wireless services and mobile commerce. Bharti Airtel had over 276million customers across its operations at the end of August 2013.