Airtel Bangladesh Limited, the fastest growing telecom operator in Bangladesh, has launched its 3G services in Habiganj with a colorful festive rally within the areas of the city yesterday. 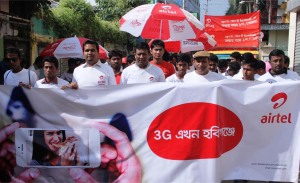 Airtel thrives to deliver best in class 3G services for its valued customers of Bangladesh. The company has been relentlessly expanding its 3G network throughout the country. The launch of 3G services in Habiganj is a reflection of airtel’s commitment to expand superior network quality in nooks and curves of the country.

PD Sarma, Managing Director and Chief Executive Officer of Airtel in his statement said, “The launch of 3G services in Habiganj is a matter of great pride for us at airtel. We believe our best in class 3G services will have a positive impact on the lifestyle of the residents of this progressive district.”

Bharti Airtel Limited is a leading global telecommunications company with operations in 20 countries across Asia and Africa. Headquartered in New Delhi, India, the company ranks amongst the top 4 mobile service providers globally in terms of subscribers. In India, the company’s product offerings include 2G, 3G and 4G wireless services, mobile commerce, fixed line services, high speed DSL broadband, IPTV, DTH, enterprise services including national & international long distance services to carriers. In the rest of the geographies, it offers 2G, 3G wireless services and mobile commerce. Bharti Airtel had over 305 million customers across its operations at the end of October 2014.