The company has developed in the past a Electro Water Separation (EWS), a high-speed, chemical-free process to clean up large quantities of water; and it is planning to provide the technology to the low-cost algae growth system from Algasol Renewables. 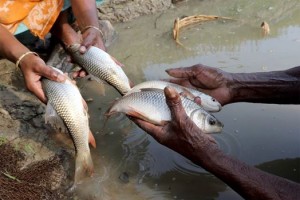 The integrated system will launch at Algasol’s new facilities in Bangladesh — a large-scale demonstration of micro-algae production for fish feed.

“With our technology showcase in Bangladesh, we plan to demonstrate the feasibility of large-scale fish feed production operations capable of utilizing healthy and low-cost algae,” Miguel Verhein, executive director of Algasol Renewables, said. “We’re very pleased that our long-time partner OriginOil plans to join us to equip the showcase with the company’s own Electro Water Separation process for algae harvesting for fish pellets.”

Algasol estimates the Bangladesh site will launch in the coming months with strong support from the local and national government.

Initially, the site will cover 6.5 acres and be capable of producing approximately 25 metric tons of micro-algae per month. Algasol recently launched a showcase site on the island of Mallorca, Spain (PHOTOS), which OriginOil also plans to equip for harvesting in spring 2015.

Algasol Renewables estimates that algae can be produced for feed using its proprietary technology at industry-low prices, and is negotiating agreements for micro-financing to help large numbers of small farmers in the low-lying delta region of Bangladesh roll out this complete growth and pelletizing system.

Under this plan, Algasol plans to commit to two initial OriginOil harvesters with a processing capacity of 120 liters per minute each for the Bangladesh showcase before the end of 2014, with a short term expectation of roughly 40 more such units.

In a May, 2012 joint announcement, Algasol, collaborating with NASA and Lawrence Berkley National Laboratory, agreed to bundle its offering with OriginOil’s algae harvester. This new project is an expansion of that early marketing partnership.

“Algae production faces two major challenges—growing algae quickly and efficiently, and harvesting it at a low cost. Here at OriginOil we’ve found a solution for harvesting algae. Our partners at Algasol are highly focused on growing algae,” said Jean-Louis Kindler, OriginOil’s chief commercial officer. “Bio-reactors are too expensive for massive scale, and open ponds cannot provide the contaminant-free environment that the human food chain requires. Algasol’s patented technology for growing micro-algae in floating bags is the controlled, low-cost solution, and we are delighted to combine our harvester with their system.”

In December of 2013, OriginOil inaugurated its permanent technology showcase with a demonstration for local and state officials at Aqua Farming Tech, a sustainable fish farm in Thermal, California, in California’s Coachella Valley.

Since that time, OriginOil has continued to demonstrate efficient algae harvesting for fish feed at the site. The company’s major focus is on water treatment, but it is eyeing gains in aquaculture as well, as it notes the strong potential for growth in the $100 billion global aquaculture industry. The company cites the United Nations’ State of the World Fisheries report with estimates for industry growth of 33% between 2012 and 2022, compared to an increase of only 3% in capture fisheries.