Apple has become the most valuable U.S. company in history, with its stock capitalization rising even higher than a record-setting $700 billion. And with an $850 million investment in a solar energy farm to power its offices, it’s using its wealth in part to raise awareness about climate change and set an example for other companies. 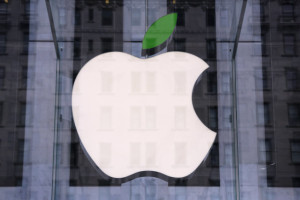 Apple CEO Tim Cook this week announced the plan to build a clean energy plant with First Solar during a conference hosted by Goldman Sachs in San Francisco – a move Cook called “the right thing to do both socially and financially.” Cook explained that the solar farm to be built in Monterey County, California, will provide ”enough renewable energy for all of our new Apple Campus 2, every other office we have in California, all 52 Apple retail stores in California, and our data center in Newark, California.”

“We at Apple know climate change is real,” Cook said. “The time for talk is past and the time for action is now. All of our data centers are now on renewable energy.”

The tech giant has taken other steps in recent years to show environmental responsibility: Apple reduced its dependence on fossil fuels after advocacy group Greenpeace criticized it in 2011 for its reliance on coal. Between 2010 and 2013, Apple’s use of renewable energy at its worldwide corporate holdings skyrocketed 169 percent.

This growing focus on renewable energy led the Environmental Protection Agency to rank Apple as the sixth-biggest green power user on its Green Power Partnership list earlier this year. Silicon Valley is represented well in the agency’s top 100, with Intel Corp. holding the top slot, followed by Microsoft in second place and Google in fourth place.

Apple’s approach to solar energy is innovative not because of the scale of the investment but because the company is buying its own energy generator, which is a better cost-saving business model that others could follow, says Jigar Shah, a venture capitalist who invests in clean energy firms.

The cost of electricity has boomed since 2000, Shah says, so Apple stands to save a bundle on maintenance costs, complementing the tax breaks and other incentives offered by the government to encourage renewable energy use.

“Many companies like Apple, Google, Rice University, Microsoft, IKEA and others have found that owning their own electricity generator is a much better way to hedge their future electricity costs,” says Shah, president of investment firm Generate Capital.

To further this trend, 19 major businesses last year agreed to buyers’ principles they say would make it easier for them to reduce dependence on fossil fuels. The principles, published by the World Resources Institute, are supported by businesses including Wal-Mart, Intel, Cisco, Facebook, Sprint, Volvo and General Motors.

“Sixty percent of the largest U.S. businesses have set public climate and energy goals to increase their use of renewable energy,” a report accompanying the principles states. “Companies are setting these goals because reducing energy use and using renewable energy have become core elements of business and sustainability strategies.”

Technology companies are among the top adopters of renewable energy in part because many Silicon Valley firms sell products to consumer markets rather than other businesses, so they feel increased pressure to show social responsibility, says Alex Perera, acting director of the global energy program at the World Resources Institute.

“It also gives them a mandate to be more innovative … to take risks and think longer-term,” Perera says.

Apple has a history of inspiring other companies to embrace new ideas – such as smartphones and wearable devices – so its solar energy investment is “a significant turning point in the inevitable transition to a sustainable economy,” says Steve Cohen, executive director of The Earth Institute at Columbia University.

“When an industrial giant and thought leader like Apple commits itself to renewable energy, it sends a strong signal to its competitors and to the public that the fossil-fuel era is coming to an end,” Cohen says.