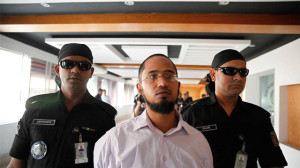 Shafiur Rahman Farabi, prime suspect in the Avijit killing, has said during interrogation that the slain blogger-writer “has got what he deserved.” Although he claimed that he had nothing to do with the murder, Farabi praised the incident saying Avijit got the reward for mocking religion.

Ziaul Ahsan, additional director general (ADG) of RAB, told these to the Dhaka Tribune yesterday. Earlier in the day, Rapid Action Battalion brought Farabi in front of reporters and said he had been nabbed from the capital’s Jatrabari around 5:30am; he was trying to leave for Chittagong.

Meanwhile, seeking anonymity, a high official of RAB told the Dhaka Tribune that analysing CCTV footage from around the crime scene, they had identified five people who were following Avijit and his wife Bonna from the book fair premises.

“In the footage, one of those five men could be seen pointing at the couple when they were leaving the fair. Later, they went away and another team started following Avijit and Bonna,” the RAB official said. While addressing a briefing at the force’s headquarters in Uttara in the capital, Commander Mufti Mahmud Khan, director of the Legal and Media Wing of RAB, told reporters yesterday that they have proofs that Farabi was involved with the killing.

Farabi had been posting photographs and news about Avijit and his family on social media for a long time and instigate others against him, Commander Khan said. “On Thursday, one of his Facebook friends posted a photograph of Avijit soaked in blood and asked Farabi whether he had seen that photo. In reply, Farabi said yes.

“After that, Farabi wrote in a status update that he would be arrested within a day or two,” Commander Khan said at the briefing. The RAB director also cited another widely-discussed post put up by Farabi on social media in which he said Avijit would be killed once he came to Bangladesh from the USA.

In reply to a query, Commander Khan said: “No accused ever admit involvement right away. Information come out only after interrogation. We are still not sure whether Farabi was directly involved with the killing or not.”

According to RAB, Farabi said during primary investigation that he came across Avijit Roy five years ago as both of them used to blog. At one point, they got into a conflict of opinions. Around two years ago, Avijit blocked Farabi. But Farabi kept on sending messages and threats using other media.

In 2010, Farabi, a former student of physics at the Chittagong University, joined banned Islamist militant outfit Hizb-ut Tahrir. At that time, he got arrested and spent about a month in jail for his militancy links. He never completed his studies.

In February 2013, Farabi was arrested by police again after he gave threats to the Imam who conducted the janaza or the funeral prayer another slain blogger and Gonojagoron Moncho supporter Rajib Haider. He however was freed on bail in August of that year.

RAB also said Farabi was among those who commented under the Twitter post of a group named “Ansar Bangla-7” that rejoiced the murder of Avijit. Later in the day, RAB handed Farabi over to the Detective Branch (DB) of Dhaka Metropolitan Police (DMP) who are investigating the murder.

Contacted, DB Joint Commissioner Monirul Islam, who is coordinating the investigation, said they are now analysing the CCTV video footage and talking to witness for hunting the killers down. “But we are still to make any breakthrough.”

Bangladesh-born US citizen Avijit Roy, who was a bio-medical engineer in the states, was hacked to death with machetes near the TSC roundabout on the Dhaka University campus on the night of February 26.

Avijit died at the Dhaka Medical College Hospital later and his wife Bonna, who sustained severe injuries in the attack, is currently taking treatment at the Square Hospital in the capital. Yesterday, a team of the US Federal Bureau of Investigation (FBI), who are assisting police in the investigation, went to the Square Hospital and talked to Bonna, sources said.

Avijit came to Bangladesh from the USA a few days before he was killed to attend the launching of one of his nine books at this year’s Amar Ekushey Book Fair. He and his wife Rafida Ahmed Bonna came under attack after they came out of the book fair having attended the book launch.

Friends said Avijit had got a lot of threats over the last few years because of his progressive, anti-orthodoxy and anti-superstition blog posts and books. They said Farabi was one of those who openly threatened Avijit over various media. -Dhaka Tribune