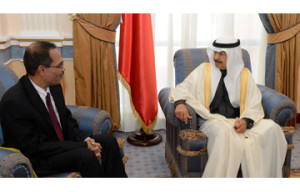 The envoy conveyed to HRH Premier greetings from his Bangladeshi counterpart Sheikh Hasina Wajed, as well as her admiration of the progress strides made by the kingdom thanks to the sound programmes adopted by the government, under his leadership.

HRH Premier expressed pride in the advanced level of Bahrain-Bangladesh ties, strengthened further thanks to the keenness of the two countries to develop them.

HRH the Prime Minister underlined the kingdom’s desire to bolster cooperation with friendly Bangladesh through broadening its areas in various fields.

He lauded the role of the Bangladeshi community in the kingdom’s development projects.

Ambassador Momin-Ur-Rahman affirmed his country’s desire to consolidate cooperation with the kingdom through diversifying its fields.

He expressed his country’s pride in HRH Premier’s directives to strengthen ties with it, which, he said, will benefit both sides.