Gopal Vittal took over as the CEO of Bharti Airtel (India) at a time when the company was under stress. The trump card—Vittal, which Sunil Mittal has played for a possible turnaround of the company, worked in favour.

The country’s largest cellular operator reported its first growth in profit after 15 consecutive quarters of fall in net profit, in October-December 2013, co-incidentally the quarter when Vittal took over.

Since then, Bharti Airtel continued to report growth in profits every quarter, ensuring better performance in the next one.

But, all is not well for the company. While Vittal was able to take tough but much-required corrective steps to ensure the India growth story, Africa continued to increase pressure on the company’s balance sheet. Added to its woes are now Bangladesh and Sri Lanka. 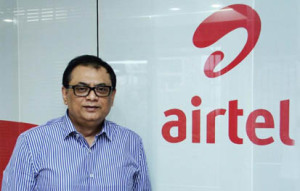 Even a couple of quarters ago, Bangladesh had reasonably manageable performance. But, numbers in July-September quarter (2014) has shown that Bharti really needs to re-look at its business in Bangladesh. Sri Lanka, on the other hand, had never shown Bharti any money.

A closer look at Bharti Airtel’s balance sheet would reflect Vittal’s success more prominently. During July-September 2014, Bharti Airtel reported a net profit of Rs 1,383 crore, a 170.2% rise from the corresponding quarter previous fiscal year. Bharti could have reported a much stronger result if it did not have to bear the increasing pressure from operations in Africa, Bangladesh and Sri Lanka.

India alone has generated a net profit (before exceptional items) of Rs 2,449 crore, while it had loss of Rs 753 crore in Africa and Rs 153 crore in July-September. In the same quarter previous year, loss in Africa was much lower at Rs 288 crore and loss in Bangladesh and Sri Lanka was lower at Rs 133 crore. Net income (before exceptional items) in India was at Rs 967 crore.

Considering that Bharti Airtel does not require taking the pressure from Africa, Bangladesh and Sri Lanka, the company’s net income (before exceptional items) has actually jumped 2.5 times in July-September 2014 as against the reported figure for the corresponding quarter previous fiscal. Loss from its operations in Africa, Bangladesh and Sri Lanka, on the other hand, jumped 1.6 times during the comparable period.

However, capex in Bangladesh and Sri Lanka together almost halved to Rs 66 crore from Rs 132 crore and operating cash flow close to doubled. Ebidta margins in Africa came down to 23.6% in the quarter from 26.9% in the corresponding quarter last year, a fall of 330 basis points.

Voice Arpu in Africa dipped 6% to $4.1 and realisation from voice also declined by 7% to $0.03 during July-September. Like India, non-voice revenue contribution also increased to 23.8% from 21.5% at the end of June quarter. While data usage per customer increased by 10% during the quarter, realisation from data dipped by 9% and data Apru remained flat.

But, Christian de Faria, MD and CEO, Africa, Bharti Airtel said after the results that impact was in line with the company’s expectations. “We are optimistic about the potential in Africa, despite these aberrations,” he added.

Analysts have remained sceptic about Bharti Airtel’s overseas operations. “At this stage, it would be very difficult for Bharti Airtel to correct operations in Bangladesh. Sri Lanka never paid back. And pressure in Africa has been increasing. Bharti has been looking for a buyer for its Sri Lankaoperations for quite a long time, but yet to find a suitor. The way Bangladesh is going, it may also have a similar fate,” said a top-level analyst with a global management consulting firm, and has experience of working with a rival telco.

Companies like Axiata and Etisalat have been named as potential suitors for Bharti’s Sri Lanka operations in the past. But a deal could not be sealed. “Geographical expansion did not work for Bharti and it just increased its burden. WhileIndia continue to show better performance, sustainability in overseas market is becoming an issue for Bharti,” added the analyst.

African operations continue to be a sore point for Bharti. Credit Suisse, in a note after the company’s quarterly results, stated with rising capex and notoriously high tax levels, this only means that management target of cash-flow self-sufficiency in Africa is getting pushed out into the future.

“Initially, Airtel needed to grab subscriber market share to penetrate the market. Now, it is time to inculcate value out of it, which is yet to see even any indication,” said a Mumbai-based analyst. The underperformance in Africa is seen as the “biggest key negative” by the analysts, including Morgan Stanley.

And there is increasing debt which touched Rs 62,215 crore (about $10.09 billion). Bharti’s debt started jumping after it bought Zain Telecom’s Africa assets to enter one of the most under-penetrated markets in 2010. But, unlike its competitors, it did not even have a comprehensive infrastructure backend and it required fresh investments.

To date, Bharti is yet to achieve any of its targets — $5-bn revenue from African operations with Ebitda margin at 40% and 100 million subscribers by March 2013 — that it had cited when it entered Africa. At the end of September 2014, it had 71 million subscribers, $1.1 billion of quarterly revenue and EBITDA margin stood at 23.6%.

If Mittal stays with his dream of cracking the African continent, it will, as analysts say, remain a pain for a few years, unless a miracle happens.