“We have conveyed our interest to join with TAPI as we are struggling to meet mounting natural gas demands with local production,” he said. 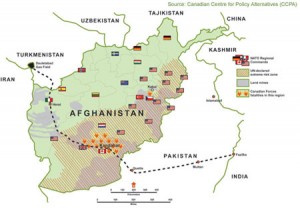 “We shall start formal talks with all concerned including the TAPI participating countries and Asian Development Bank, the facilitator of the project,” he said.

In May 2012, Bangladesh sent an initial proposal to the TAPI steering committee expressing interest in the project. The panel accepted it and asked for more details.

But state-owned Gas Transmission Co. Ltd. concluded in a preliminary study that the project would not be economical for Bangladesh, given the great distance between Dhaka and both the pipeline origin and terminus.

“If we get connected with the TAPI project, we will have to pay huge amount of money as wheeling charges to the countries through which the gas will pass—Afghanistan, Pakistan and India—on top of the actual price for Turkmen gas,” GTCL Managing Director M Aminur Rahman said in January 2013.

However, the dismal outlook for Bangladesh’s gas exploration has made it rethink joining the TAPI project, said M Abu Taher, additional secretary of the Ministry of Power, Energy and Mineral Resources, who joined the Turkmenistan visit.

Monsur said Bangladesh would benefit more from the project if it extended to West Bengal, India, instead of New Delhi.

“We shall raise the issue with India soon,” he said.

Bangladesh’s gas output is about 2.34 Bcf/d against demand of 3 Bcf/day, according to Petrobangla. It depends solely on domestic production to meet local demand.