Bangladesh Social Club (BSC) has launched a wing to focus on women from their community living in Oman.

Speaking to Times of Oman, the president of the BSC, Shafiqul Islam Bhuiyan said, “It was a dream of the BSC to form a women’s wing and now that has come true.”

The wing was formed in the presence of Safia Al Omairi from the Ministry of Social Affairs and all the executive members of BSC at the Al Massa hall in CBD recently. The women’s wing will start functioning with 40 members. 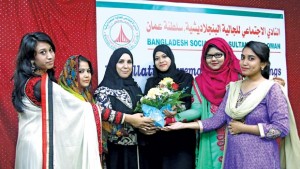 Elaborating about the wing and its responsibilities, convener of the BSC women’s wing Fahmida Hoque said that they would begin with weekly training sessions in English for its members.

She also expressed her gratitude to His Majesty Sultan Qaboos bin Said.

“We sincerely thank His Majesty from the bottom of our hearts, for having worked so hard for the evolution of women. He encouraged them to be educated and independent. He made them realise their worth in the community. It is because of him that women now are so self-reliant. We also thank him for giving expatriate women an opportunity to participate in club activities.”

Sirajul Hoque, general secretary of BSC said that they wanted to work for the betterment of the community in the future, along with the people in the Bangladeshi community.

“We also want to open our branches in Salalah and Sohar very shortly to tackle issues of Bangladeshis in Oman,” he said.