For more than 10 years, Sharif Hossain has worked barefoot and barehanded in the chemical warehouses that sprawl across Old Dhaka. The work has taken its toll — today, he looks pale and exhausted; far older than his 35 years.

Six days a week, Hossain handles liquid and solid chemicals like sulfuric acid, sodium, dye, and soda, without any kind of protective gear.

For this, he makes about 6,000 taka (US$77) a month. The pay is nearly twice what he earned as a day laborer, but the job has already taken a disastrous toll on him. 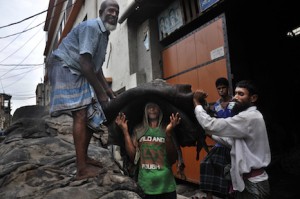 “Two or three times a year I suffer from respiratory problems including coughing and asthma and it takes two to three weeks to get well. Each time I have to spend 1,000 to 1,200 taka but my employer never pays for my treatment,” said Hossain.

Though workers at Hossain’s warehouse have repeatedly requested the owners to provide protective masks and gloves, they’ve consistently refused.

“The doctor told me that I caught this disease [asthma] from the job and advised me not to do heavy work,” he said. “But I have to work as I have to look after my elderly parents, wife and two children. I don’t have an option because I don’t have other job skills.”

Hossain is one of tens of thousands who labor in Dhaka’s chemical industry. Chemical workers face extremely dangerous conditions, injury, sickness and even death on a regular basis; but they are not alone.

Each month an average of 21 workers die and hundreds fall sick in Bangladesh’s leather, chemical, ship-breaking, and agricultural sectors due to the indiscriminate and unprotected use of hazardous chemicals, according to a recent survey by the Bangladesh Occupational Safety, Health and Environment Foundation (OSHE), a Dhaka-based labor advocacy group.

These sectors combined employ more than half the workforce in this nation of 160 million where about 50 percent of the population is illiterate and earns less than $2 per day.

“Use of dangerous chemicals without any protection has become very common in Bangladesh. Every year hundreds of people die but no one seems to care,” said Repon Chowdhury, executive director of OSHE.

About 85 percent of farmers in largely agricultural Bangladesh use poisonous chemicals and pesticides, and 30 percent suffer from chronic health problems, said the report which was released in Dhaka last week.

Since 1996, more than one thousand workers have died while thousands more fell sick and were injured due to unregulated chemical use in the ship-breaking industry located near southeastern port city of Chittagong, it added.

Tannery workers, said the report, face the most risks of all. In that sector, workers suffer extremely high rates of chronic skin diseases, respiratory illnesses and gastric problems.

“Through inhaling and exhaling, absorption and food consumption, chemical poisons enter the human body and they can cause skin diseases and immensely damage the heart, reproductive and respiratory organs,” said Dr A Masood Chaudhury, chairman of the Dermatology and Venereology Department at Bangabadhu Sheikh Mujib Medical University in Dhaka.

“This is a serious public health issue and the government needs to be very strict in enforcing health and safety regulations in every industry that uses chemicals which are dangerous to human health,” he added.

Activists say the problem is exacerbated because owners and the government rarely if ever take responsibility for the deaths and illness caused by industrial chemical use.

“I have worked in the industry for forty years and I have seen workers dying and getting injured in accidents like acid explosions and acid burning the body. In no case is an employer held responsible and they don’t compensate workers,” said Nasir Hossain, 59, secretary of the Bangladesh Chemical and Perfume Workers Union.

Hossain said he has suffered several accidents including acid burns on his hands, but has never received any compensation.

“Each time I have been blamed for being negligent and once the employer cut my salary to pay for my treatment.”

Hazardous and inflammable chemicals are not only posing dangers to workers’ health but also to the lives of tens of thousands of Old Dhaka residents.

In 2000, a chemical warehouse exploded and a huge fire engulfed several adjacent residential buildings in the Nimtoli area of Old Dhaka. More than 120 people were killed and hundreds injured.

The fire provoked an unprecedented media and public outcry, prompting the government to order the industry to move to a Dhaka suburb called Keraniganj. However, the order has not been enforced.

Owners insist they are concerned about the safety of workers and environmental issues, but many downplay the hazards.

“There are no big risks in working in this industry unless the liquid chemicals fall on the body. To make the work safer we provide workers with protective clothes and compensate them if they get injured in any workplace accident,” said a senior member of Bangladesh Chemical and Perfume Shop Owners’ Society who spoke on the condition of anonymity. “There are some owners who don’t care for workers, but others do care for them.”

He added that the industry would shift from the city to a planned “chemical estate” once the government sets it up, but was unable to say when the project would begin.

In the meantime, none of the factories and warehouses have moved from Dhaka and accidents continue to occur.

“About 60 percent of fire accidents in Dhaka are caused by chemical and plastic factories,” said Enayet Hossain, a spokesman for the Fire Services and Civil Defense Department.

“We have advised higher authorities to push the industry out of the city. There is no deadline for it and we know little about the progress made so far,” he said.

Workers rights and safety are of serious concern for the government, insisted Abdul Khadem, deputy inspector-general at the Department of Inspection for Factories and Establishment.

“Time after time we visit factories and we warn owners if we find any health and environmental lapses. In cases where it is necessary we take punitive and legal action against them,” said Khadem.

But asked when the last time a factory was shut down or an owner jailed or fined for violating health and safety regulations, Khadem couldn’t say.

And as long as the lax enforcement continues, Dhaka residents remain fearful for their lives.

“We still can’t forget the [Nimtoli] disaster and we live in constant danger of a repeat,” said Kalim Mollah, owner of a residential building in Nimtoli. “I fear one day a fire from one of the chemical warehouses might burn down my building and leave me penniless.”