Bank Asia provided a 3-week Foundation Training to its 27 (twenty seven) officers in an effort to improve their professional efficiency. Mr. A. Rouf Chowdhury, Chairman of the Bank, handed over 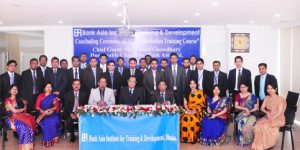 Bank Asia puts the highest importance on training so as to augment knowledge and skill on the part of personnel.