As a part of its corporate social responsibility, Bank Asia has provided higher studies scholarship to seven insolvent meritorious students of Tarail Upazila of Kishoreganj district on Saturday ( 8 March ). 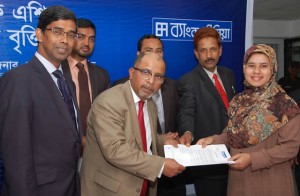 It may be mentioned that Bank Asia gives scholarships for higher study to the meritorious students in the rural areas, where the Bank has branches. A total of 194 (one hundred ninety-four) students have been selected for Bank Asia Higher Studies Scholarship for the year 2013.