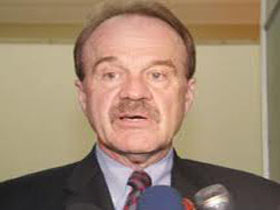 US Ambassador in Dhaka Dan Mozena on Saturday said Bangladesh can become a mighty player in the global IT and in other sectors by dint of hard and creative work by each young entrepreneur in the country.

“I believe fervently that Bangladesh can become a mighty player in the global IT world and in other sectors as your startups take root,” he said. The US diplomat made the remark while addressing a prize distribution ceremony of Global Innovation through Science and Technology (GIST) DEMO Day at a city hotel.

And I see other creative startups flourishing and prospering.” The UD envoy also said the vision will become reality and young entrepreneurs are the ones who will build the renaissance of Bangladesh. He said America will remain partner in helping bud Bangladeshi entrepreneurs connect with each other and connect with innovators around the world.

Mozena said he is going back to America in June and lead a delegation of young entrepreneurs. “I travelled this country and I’ve seen so much in this country.

I’ve that perspective…it’s incredibly positive stories,” he said adding that he encourages Bangladeshis to tell their own stories. The US Embassy in cooperation with Startup Dhaka, welcomed over 365 members of the Bangladeshi entrepreneurship community to the US Department of State’s Global Innovation through Science and Technology (GIST) DEMO Day.

The morning included lectures on key entrepreneurship topics. Seven top Bangladeshi startups pitched their science and technology business ideas to the audience and showcased their innovative ventures. In the two days leading up to the GIST DEMO Day, GIST and Startup Dhaka worked with 30 Bangladeshi entrepreneurs, providing intensive training aimed at honing participants’ skills to advance their startups.

US mentors traveled to Dhaka to share their expertise and business stories with the young innovators. Jim Bagnola, President of the Leadership Group International, worked with the entrepreneurs on building relationships and startup teams. Jim Chung, Executive Director of Entrepreneurship and Technology Transfer at George Washington University, discussed cost structure, revenue streams, and negotiating with investors.

Thor Ernstsson, Founder of Casual Corp, taught a session on raising capital for startups. Each of the 30 Bangladeshi startups also received one-on-one mentorship from U.S. and local mentors, such as Riyad Husain of Magnito Digital and Nazmul Chowdhury, Senior VP of City Bank. Launched in 2011, GIST is a partnership led by the US Department of State and CRDF Global.