The stall of the Bangladesh tourism department was removed from the Bangladesh Pavilion at the International Kolkata Book Fair on Sunday after Bharatiya Janata Yuva Morcha members protested against the circulation of a distorted map of India. 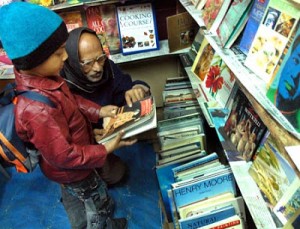 “In the map, Pakistan-occupied-Kashmir has been shown as part of Pakistan. We strongly condemn it. It is humiliating and insulting to the citizens of India,” said BJP state secretariat member and district observer Krishanu Mitra. He added that officials of the Bangladesh deputy high commission have met them and apologised.

The protestors have also submitted a memorandum to the Publishers and Book Sellers Guild. Authorities at the Guild said it was a mistake made by the Bangladesh tourism department. “Showing any part of Kashmir as part of Pakistan is a gross mistake and we don’t approve it. We have expressed our discontent and the stall was shut,” said Tridib Chatterjee, honorary general secretary of the Guild.

Md Mofakkharul Iqbal, first secretary (press), Bangladesh Deputy High Commission, said the same map had been in circulation since 2008 and had not come to anybody’s notice. “It is a very small distortion and was omitted from Google maps. But I am not trying to play it down. It is a mistake nevertheless. They should have been extra careful. The store was shut and we replaced it with another one today,” Iqbal said.

Sources said an internal inquiry has been initiated against the employees of the Bangladesh tourism department.