The future of news is not just about print versus digital as delivery mechanism, but what is the best user experience, said Jay Lauf, publisher at Quartz. Thereby, it would not be wondering sometimes print is better than digital.

Quartz is the business news publication of the Atlantic Media Company and was launched in 2012. Though digital media weighs heavily on the market of print version of news, British media bosses said they are still optimistic on the future of the traditional dissemination vehicle, reports Xinhua. 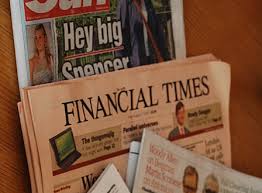 Under basis scenario, “the death of print is not as fast as we are now estimating,” was the consensus voice from presenters and attendees at FT Digital Media Conference 2014 which was held this week in London.

The death of print is a rolling 10 or 15 years away, said John Ridding, President of Pearson Professional and chief executive of Financial Times at the conference.

“When we will stop printing the FT? I’d say the same now—

10 to 15 years,” Ridding said. He also noted that the year of 2013 was the first time in Financial Time’s more than 100 years’ history that its print business was profitable before advertising.

The sales of the FT Group rose one percent to 449 million pounds (747 million U.S. dollars), compared to a 2.3 percent growth and 5.18 billion pounds of sales of its parent company Pearson Plc.

The newspaper currently has around 450,000 digital subscribers and 250,000 print subscribers, said Ridding.

Andrew Miller, chief executive of Guardian Media Group, said newspaper is one of the aspects that people consume news, and it has the most royal audiences.

Earlier this month, the newspaper said its digital revenue will hit 117 million pounds in the fiscal year ended March 31.  And the overall revenue, including print, will be up more than five percent from last year to around 345 million pounds.

“We have seen our (print) circulation growth for five months. And we continue to see strong future for print,” said Miller.

Miller also announced that Guardian will be investing more in “geographic expansion” or go globally, and the best way to market the newspaper is by investing in strong journalism.

The role for print will shrink, and it’s more about content and flexible journalism than channel, admitted Miller.

The Guardian had 20 million stories read in Facebook last month, two and half million read in Twitter, said Million.

Therefore, “the future of the media is about designing the products that hit the different types of audiences,” he said.