Thousands of people have launched a campaign to stop an 11-year-old boy being deported to Bangladesh weeks after his little brother died following a long battle with cancer. 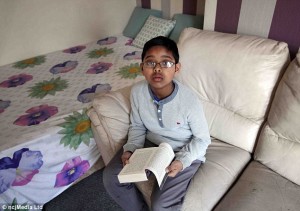 Newcastle after the Home Office turned down their bid to remain in the UK.

Now 3,500 people have signed a petition to allow the schoolboy and his mother to stay in Britain, where Maarij’s 10-year-old brother Saffat is buried.

Saffat died of meningitis last month, after his fight against an aggressive form of cancer and several rounds of chemotherapy left his immune system fatally weakened.

The family first came from Bangladesh to the UK in October 2007 to live with Maarij and Saffat’s father, who was studying for a PhD.

Saffat was subsequently diagnosed with rhabdomyosarcoma, a type of childhood cancer which attacks connective tissue in the face and left him severely disfigured.

After years of chemotherapy and radiotherapy, he fell ill with meningitis, and died on March 4.

The boys’ father abandoned the family and returned to Bangladesh after Saffat fell ill, while the Home Office denied Mushammat’s request to stay in the UK after her visa expired in 2013.

The family tried to challenge the decision, but a tribunal turned down their appeal last year.

Mushammat, 34, said: ‘All Maarij knows is Newcastle, all his friends are here, his life is here. He and Saffat were incredibly close, they were inseparable and his death has left him heartbroken.

‘He goes and sits at his brother’s graveside each day. The thought of him never being able to do that again is terrible to us all.

‘The support we’ve had from all parts of the Tyneside community has been humbling and we very much want to stay in the area that has become our home.’

Maarij’s supporters say that he has become withdrawn and shy after Saffat’s death, and warn that his education will suffer if he is sent to Bangladesh.

Immigrants to the UK who are on a student visa, and their family members, are only allowed to stay in the UK until their course comes to an end.

They must then apply for a new visa, such as one linked to a specific job, or return to their home country.

However, under the Human Rights Act 1998, immigrants facing deportation are able to appeal on the grounds that being forced to leave the UK is a breach of their human rights.

A number of immigrants have claimed that their ‘right to respect for private and family life’ under Article 8 of the Act would be breached if they were made to leave their new home in Britain.

However, the use of the Human Rights Act has attracted controversy because convicted criminals have tried to use it to avoid being deported.

Local councillor Dipu Ahad has set up an online petition calling on the Home Office to reconsider its decision.

He said: ‘It must be heartbreaking for the mother and brother of Saffat, knowing that they may be deported very soon, and they are unlikely to have access to Saffat’s resting place ever again. I can’t even begin to imagine the pain.’

The family’s last chance is to appeal to the Court of Appeal, but they are unlikely to succeed unless they can prove that the authorities have made a legal error.

A spokesman for the Home Office said: ‘On February 6, 2013 the family applied to the Home Office for leave under Article 8 of the Human Rights Act 1998 (right to respect for private and family life), this was refused by the Home Office on January 22, 2014.

‘The family subsequently lodged an appeal against this refusal. This appeal was dismissed by the First-tier Tribunal, which is independent of the Home Office, on August 26, 2014.

‘This decision was subsequently upheld by the Upper Tribunal (also independent of the Home Office) who dismissed the family’s appeal on December 17, 2014.

‘The family have a further, final, right to appeal direct to the Court of Appeal.’

– By Hugo Gye for MailOnline