China has signalled it will further ease monetary policy to kick-start the world’s second largest economy by cutting the amount of funds that some banks must hold in reserve, according to a government statement. 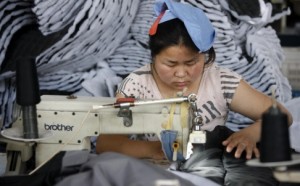 The State Council, China’s cabinet, announced after a meeting on Friday that it would trim reserve requirements for banks which lend to the agricultural sector and small enterprises, said the statement posted on the central government website.

It gave no details of the timing or sum involved.

China launched a similar, targeted reserve cut for banks in rural areas just over a month ago as worries mount that its economy—a key driver of world growth—is slowing more sharply than expected.

“Currently, the movement of the economy is stable, but downward pressure is still relatively large,” the State Council said, adding the government would “fine-tune” policy at an appropriate time.

Premier Li Keqiang in March announced an economic growth target of “around 7.5 percent” for this year.

“It is clear that the government has become more concerned about the continued economic slowdown and wants to further increase the strength of policy support,” Wang Tao, a Hong Kong-based economist for bank UBS, said in a research note.

“Policy support will strengthen as the economy weakens further, so as to defend the growth target for 2014,” she said.

The State Council announced a basket of other measures on Friday, including more financial support for small companies, lowering the cost of financing and cutting administrative fees, the statement said.

But some analysts believe China will refrain from more aggressive measures to boost growth, such as slashing interest rates or cutting reserve requirements for all banks, on worries excessive credit could pose financial risk.

“Broad cuts to (reserve requirements) and benchmark interest rates are only likely if May and June data continue to surprise on the downside,” investment bank Goldman Sachs said in a research note on Saturday.