Nine northern districts in Bangladesh have been affected by severe flooding that has seen 17 rivers rise above the danger level. Around one million people there have lost their homes, land and livelihoods.

The situation has started to improve in some places with water levels receding in the major rivers in Kurigram, Lalmonirhat, Nilphamari, Rangpur, Gaibandha, Bogra and Sirajganj districts in the Brahmaputra basin since 31 August. 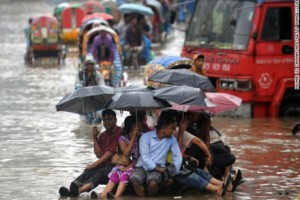 However, severe river erosion in the flood-hit districts has destroyed yet more properties, land and local assets. Erosion and flooding has so far partially or totally damaged 17,074 houses, 308 kilometres of kutcha roads, 45 kilometres of embankments and 11 bridges. Standing crops on 3,429 hectares of land have been submerged under floodwater in four upazilas.

The Church of Bangladesh is monitoring the situation and is in contact with the ACT Alliance and Christian Commission for Development in Bangladesh (CCDB) who are working in the region.

In India and Pakistan thousands of people are stranded across the Indian part of Kashmir and parts of northern and eastern Pakistan. Flash floods and landslides have caused more than 300 deaths after six days of heavy rain. So far nearly 9,000 people have been evacuated and communities are preparing for worsening conditions.