Bangladesh has raised concerns over the recent wave of threats faced by Bangladeshi expatriates working in Maldives after a recent spike in violence saw two Bangladeshi nationals murdered and three stabbed in capital Male, a statement from the high commission said 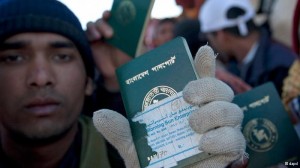 The statement said that the high commission had held meetings with President Abdulla Yameen, Home Minister Umar Naseer and Police Commissioner Hussein Waheed to maintain safety of their citizens in Maldives.

The high commission said they were keeping a close eye on the situation and warned Bangladeshi expatriates to be alert in the meantime.

All Bangladeshi expatriates are advised to stay at home after midnight and not to organize any kind of unwanted gathering of around 5-6 people, read the statement.

A 25-year old Bangladeshi, Shaheen Mia, was stabbed to death in a Male cafe in the early hours of March 22, while a Bangladeshi national identified as Bilal was found dead in Alif Alif Atoll Thoddoo Island a day later.

Meanwhile, three expatriate workers were stabbed in the same week in three different locations in Male. Following the attacks migrant workers organized a protest but were prevented from carrying it out by the authorities.

Controller of Immigration and Emigration Mohamed Anwar in a statement said expatriates protesting for their rights was against the terms of their work permits, and threatened to cancel visas without a second warning.

If action was taken against an expatriate worker for protesting, Anwar said the immigration department would also suspend services to their employers.