After two weeks of negotiating in Lima, Peru, delegates from more than 190 U.N. member countries failed to reach a consensus on a global climate agreement strong enough to serve as a foundation for what would replace the Kyoto Protocol by next year’s climate change summit in Paris.

Devex spoke with several delegates right before the final gavel, and while all indicated the text was less than satisfactory, they agree that the watered-down result was better than a failed COP20.

One of the main goals of the Lima talks was to establish the structure and format of intended nationally determined contributions — or INDCs — countries’ national climate action plans that will folded into the larger Paris 2015 agreement. 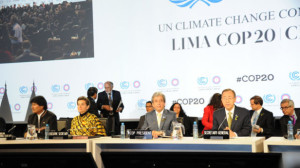 Representatives from developing nations were demanding that INDCs encompassed other strategies to combat climate change — and not just mitigation. They argued that INDCs in the Lima text must contain elements of “mitigation, adaptation, finance, technology transfer and development … capacity building and transparency.”

This is a big step forward in terms of recognizing that for a strong global climate change agreement, mitigation must coexist with other strategies. However, the text failed to specify at what levels should these elements be present, giving plenty of wiggle room for many developed countries to include weak shows of adaptation or finance while still technically fulfilling the requirements.

A delegate from a developing country who was pleased with the draft text admitted to Devex that the formulation of the INDCs would be a “free for all.” Parties have no guidelines on the structure of INDCs from Lima, leaving a mountain of work to be done by sorting through various forms of the national plans throughout next year ahead of Paris.

Another key point was differentiation, which was addressed but not in finance, as developing countries wanted.

Developed nations and developing countries were separated into those designations back in 1992, with the former being expected to compensate the latter for the damaging effects of climate change and historically high greenhouse gas emissions. Developing countries fear that changing this would be akin to rewriting the entire U.N. Framework Convention on Climate Change, opening it up to other more dangerous amendments.

In the Lima text, there is a separate paragraph that reads “the principle of common but differentiated responsibilities and respective capabilities, in light of different national circumstances.” Though a positive step in ensuring that developed countries pay for historical emissions, the last portion of the line “in light of different national circumstances,” is the key phrase here. It is the exact language lifted from the historic U.S.-China climate agreement announced in last month and could mean that an alternative definition of differentiation will make its way into the Paris agreement.

Earlier in the week, the Brazilian delegation had put forth a proposal based on “concentric circles” of development, GDP and emissions as a differentiation plan, but it remains to be seen whether the details will be hashed out and even considered next year.