After producing biogas from animal wastes and of late electricity, Bangladesh has now embarked on a plan to generate power through effective management of human waste, making a significant milestone in sanitation in South Asia.

Development partners came up with financial support for the venture to supplement the government effort in managing people sludge and reuse it for producing biogas and electricity production. 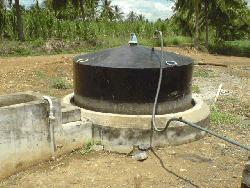 A pilot project with the financial support of Taka 31 crore from the Bill & Melinda Gates and Foundation (BMGF) and UK Department for International Development was floated in Khulna City Corporation (KCC) last week, reports BSS.

The SNV Netherlands Development Organization, a pioneer in promoting biogas plants in the world, will implement the four year (2014-17) project under the leadership of the KCC.

Talking to BSS, Rajeev Munankami, Senior Technical Adviser (Renewable Energy) of the SNV Netherlands Development Organization, said the project is designed for effective manufacturing of human waste and reuse it for generating biogas for cooking and producing electricity and organic fertilizer.

Munankami said, \”But we are not claiming at this moment because we don\’t have adequate data. So initially we will do analysis of sludge characteristic.\”

\”We will do lots of studies actually to see how it will be functioning and managed to do so,\” he said mooted an idea to develop a city sanitation plan by the end of the project period.

Director (Water and Sanitation) of the BMGF Brian Arbogast told BSS that sanitation has posed a threat to environmental health and the sanitation challenge has a bearing on development issue in Bangladesh.

Arbogast said Bangladesh has the opportunity to be a role model in the region as the country has become the first one to have such project in South Asia.

Bangladesh is a bright example in the field of environment – friendly sanitation in South Asia as its sanitation coverage stood at 94 per cent in 2009.

But, poor sanitation and healthcare system causes Taka 295 billion (6.3 percent of GDP) a year in Bangladesh, said a sanitation economy survey-2011 of the World Bank (WB).

Lack of efficient waste management is the main reason behind it, the survey pointed out.