Burma and Bangladesh will reschedule talks on the current border crisis after the Burmese delegation rejected proposals at a flag meeting in Maungdaw last week.

Maj-Gen Aziz Ahmed, the director-general of Border Guard Bangladesh (BGB), said that no clear decision was made at the border flag meeting and so talks will be scheduled for Naypyidaw in the near future. 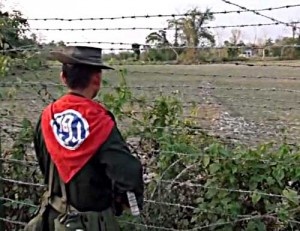 Aziz said that Burma refused a demand to withdraw its troops from positions close to the common border, and also rejected a Bangladeshi proposal to conduct joint patrols along the border.

The flag meeting was held after a recent spate of hostilities between the border guard forces of both countries which resulted in one Bangladeshi corporal shot and killed on 28 May.

During the flag meeting, Burma’s delegation handed back the gun and equipment of the dead Bangladeshi soldier. The body of Corp. Nayek Mizanur Rahman was handed over on 2 June.

Both countries had previously agreed not to position troops within five kilometres of the land border. Bangladesh accuses Burmese border guard units of breaking that agreement. Burma, for its part, maintains that Rohingya militants are active in the area surrounding boundary posts 50 to 52 and that they must protect their sovereignty.

Tin Ko Ko is reported saying at the meeting that Burmese security forces shot at Corp. Mizanur as they believed him to be a member of the Rohingya Solidarity Organization (RSO). He noted that the insurgents frequently wear uniforms similar to the BGB.

The Bangladeshi commander reportedly rejected the allegation that the RSO maintains bases on Bangladeshi soil.