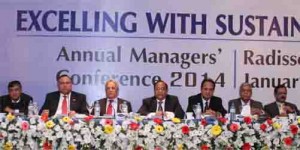 Branch Managers, Head of Divisions/Units from Head Office attended the program. The Conference reviewed overall progress of the year 2013 and chalked out various programs for achieving yearly target for 2014 of the bank.