Bangladesh and Sri Lanka are stepping forward to close Free Trade Agreement (FTA) deal between the two countries, mentioned Industry and Commerce Minister of Sri Lanka when ICC Bangladesh President Mahbubur Rahman called on him at his office in Colombo recently. 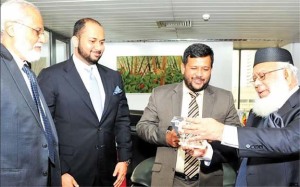 ICCB President Mahbubur Rahman assured the Minister all possible cooperation of the private sector. “I will brief our Commerce Minister and request him to expedite the FTA process for expanding trade between the two countries ,”   said Mahbubur Rahman.

Responding to ICCB President Rahman, Minister Bathiudeen said: “We welcome your intervention and this will greatly boost bilateral efforts. In fact, we too agree that it is the private sector at both sides that would finally drive trade. I am pleased to inform you that the Department of Commerce under me has already completed the Trade agreement study report on our side and both parties have now exchanged their respective reports. We are ready for the nature of Agreement that you look forward to-whether a Preferential Trade Agreement (PTA) or a Free Trade Agreement (FTA).”

ICCB President Mahbubur Rahman further added that “from your side whatever steps are taken, our Commerce Minister too will promptly reciprocate at his side. He also has been very supportive of private sector since it’s the driver of our economy. Bangladeshi’s, in business or other activities, work with a kinship with Sri Lankans. I am also pleased to say that many Lankan investments in Dhaka are doing very well. For example, the Commercial Bank of Sri Lanka is doing so well there that even our businesses seek its assistance always.”

It may be mentioned that Sri Lanka and Bangladesh inked their second bilateral joint Working Session in Colombo 23 September 2014 and came to a consensus on creating a prospective Trade Agreement between the historic partners, but stopped short of the exact nature of the Trade Agreement to be reached ‘for a while’. Bangladesh was the 25th export destination of Sri Lanka in 2013. Bilateral trade between both countries jumped by 67% in 2013 to $139.23 million from 2012’s $83.19 million.