During the yearly south Asian monsoon, almost all the water collected by the Himalayas in Nepal, north/northeast India and Bhutan transits through Bangladesh on its journey to the Bay of Bengal, depositing life-giving minerals to the soil all along the Ganges Delta, the largest river delta in the world. It is here that the mountains literally crumble to the sea.

This has resulted in Bangladesh’s flatland alluvial topography, which is the defining characteristic of the country except in the hilly regions of the southeast and northeast. The mighty Ganges and Brahmaputra rivers are called the Padma and the Jamuna in Bangladesh, and both of these massive rivers join several other smaller tributaries to eventually become the Lower Meghna, forming the great Gangetic Delta. At its widest point near Bhola Island, the river stretches to a yawning 12km-vide breadth on its final leg towards the sea. The distinctions between land, river, ocean and sky become decidedly uncertain. 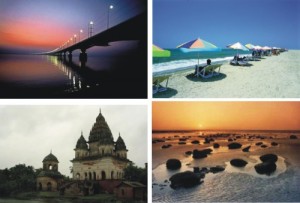 As the rivers have gradually shaped and reshaped this land, they have shaped the destinies of its people. It would be a mistake to picture the historic locations of Bangladesh’s rivers according to current maps. For instance, the Brahmaputra used to flow east of Dhaka’s present location before a major flood caused it to change course over a 30-year span during the mid-18th century. Simultaneously, the Ganges has also undergone similar changes, as it used to flow through West Bengal via the Hooghly River (today much smaller than it used to be).

Nowhere is this destiny more uncertain than in the country’s two disaster-prone areas. Firstly, the coast bordering the Bay of Bengal is vulnerable to tidal surges from cyclones. Secondly, the country’s char areas, or river islands, are also extremely prone to seasonal flooding. These islands lie mostly in the northern reaches of the Jamuna River of Rajshahi Division; many inhabited islands are destroyed and reformed each year by flooding. Despite the fact most of the islands are little more than infertile sandbars, poverty forces millions of people to live on them under the risk that their houses could be swept away each year.

In the Lower Meghna region, another area of exposure lies directly adjacent to the Bay of Bengal. Here, two processes of land loss and land accretion happen simultaneously. While the Meghna tears away strips of land beneath the villages each year, its decreasing speed causes it to deposit massive amounts of Himalayan silt into the bay, forming new land that becomes populated almost immediately despite the fact that the precious land doesn’t become fully fertile for years. Some geologists even claim that Bangladesh is ‘gaining landmass’, putting the supposed doomsday scenario of climate change into question.

Where the land ends, the Bay of Bengal begins. Most of the sea adjacent to Bangladesh is quite shallow, a result of sedimentation from the region’s mighty rivers. About 50km of the coast from the Sundarbans Forest is a deep undersea canyon known as the ‘Swatch-of-No-Ground’, where the sea floor drops to a depth of over 1,200m at some points. The swatch transports nutrient-rich sediments from the continental shelf to the deep-sea alluvial fan making up the bay. The abundance of these nutrients results in a relatively abundant population of cetaceans at the swatch.

In terms of forest cover, Bangladesh’s natural places are sadly few and far between. While the world’s largest mangrove forest at Sundarban remains protected, many of Bangladesh’s other national parks have not fared so well. Thankfully, with increasing stability and economic development, conservation programmes are finally starting to get off the ground.

As you start travelling eastward, Bangladesh’s geographic portrait takes on a new perspective. While most of the country lies at or just above sea level, the flat landscape gives way to low undulating hills in the Chittagong Hill Tracts and the hilly regions of Sylhet, some of which climb to 1,000m above sea level. This landscape is the result of the Indian tectonic plate pushing up against the Asian landmass, the same phenomenon that has resulted in the creation of the Himalayas. Visits to this area offer an experience of the true diversity that Bangladesh possesses, both geographically and culturally.

Finally, the region’s last major significant geographical feature is a massive 120krn-long strip of beach lining tile internal eastern coastline of Bangladesh, said to be the longest natural beach in the world (at 254km, Brazil’s Cassino Beach is longer, but according to the Guinness Book of World Records, it is partly manmade). Starting at Cox’s Bazaar, the white sand stretches all the way down to the Teknaf Peninsula, poking up again briefly at the coral reef island of St Martin’s. Most of this beach lies undeveloped except at Cox’s Bazaar, where native mangrove forests have long been replaced by jungles of hotels.