The 34thAnnual General Meeting of Dhaka Regional Committee (DRC) of the Institute of Chartered Accountants of Bangladesh (ICAB) was held on 17thMay 2014 at ICAB Auditorium of the Institute. The meeting was approved and adopted Financial Statements of DRC for the year 2012-2013. In the meeting Mr. Mohammad Khairul Alam FCA and Mr. Md. Yasin Miah FCA were elected as Chairman and Secretary respectively for the year 2014. 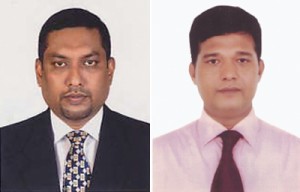 Mr. Mohammad Khairul Alam, FCA was born in 1972. He completed his master in Management from National University. He became Associate member of the ICAB in 2007 and Fellow member in 2012. He has been working in different Standing and Other Committees of ICAB. He visited many countries of the world like UK, Italy, Singapore, Dubai, Qatar, Saudi Arabia, Thailand etc. He has been participated in many training, workshop & seminar in and outside of Bangladesh. He has 17 years of professional experience.
Mr. Md. Yasin Miah FCA was born at Village-Manderpur, PS- Kasba, District Brahman Baria. He qualified as a Chartered Accountant from the Institute of Chartered Accountants of Bangladesh (ICAB) in 2007. He has long experience in various organizations like BRAC, Gonoshasthaya Pharmaceuticals Ltd., Fu-Wang Group etc. Currently he is Chief Financial Officer of Global Insurance Limited.
Other members of DRC-ICAB are Mr. Md. Fokrul Islam FCA, Mr. Md. Eftekhar Ali FCA, Mr. Md. Selim Reza FCA, Mr. MizanurRahman FCA, Mr. Mohammed Sabir Ahmed FCA, Mr. Md. Zakaria FCA and Mr. MdMonzurAlam FCA.